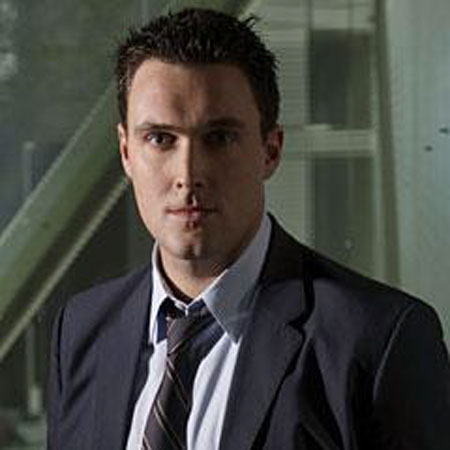 Owain Yeoman is a renowned Welsh actor best known for his role in the HBO series Generation Kill. Furthermore, Yeoman has also portrayed his role as State Police Agent Wayne Rigsby in The Mentalist.

Owain Yeoman was born on 2nd July 1978, in Chepstow, the United Kingdom. He is the son of a nuclear physicist Mike Yeoman and Hilary Yeoman. His parents still live in Chepstow. Yeoman grew up along with his sibling sister, Ailsa Yeoman.

Yeoman graduated from the Brasenose College, Oxford with MA in English Literature and was also the member of OUDS and Oxford Revue. He planned to continue his doctoral studies but failed to do so. And later Yeoman joined the Royal Academy of Dramatic Art for studying acting.

Before joining the Royal Academy of Dramatic Art for studying acting, Owain Yeoman worked at a bank in Canary Wharf, London. And after his graduation, Yeoman made his acting debut through the Oscar-nominated movie Troy as Lysander.

Likewise, Yeoman also made guest roles in the movies like Beerfest and Midsomer Murders. In 2004, Yeoman made his first appearance on the television series Midsomer Murders as Henry Charlton.

Moreover, he starred as Sgt. Eric Kocher in the HBO miniseries, “Generation Kill” in 2008. In the same way, along with the stars Simon Baker, Robin Tunney, Amanda Righetti, and Tim Kang, Yeoman starred in the series The Mentalist.

From 2015 to 2017, Yeoman appeared as Benedict Arnold in Turn: Washington Spies as well as in The Blacklist (2017) as Greyson Blaise.

The 39 years old, Owain Yeoman is married twice. Previously he was married to an English actress Lucy Davis in December 2006, in St Paul’s Cathedral, London. However, after five years, this couple separated in October 2011.

Later that, 7th September 2013 tied a knot with jewelry designer Gigi Yallouz at a private estate in Malibu, California. The couple welcomed their daughter Ever Belle in April 2015.

Instagram: Owain Yeoman with his wife Gigi Yallouz and daughter Ever Belle;

This couple is successfully maintaining their family as well as profession, and there are no any rumors of divorce.

Owain Yeoman is still active on the field of acting. In 2017, he appeared in the television series The Blacklist and Turn Washington Spies. Furthermore, Yeoman might be busy with his new projects.

Yeoman earns a decent amount of money from his acting career. Yeoman has appeared in several movies as well as in television series. Allocating information from several sources as of 2018, it is found out that Owain Yeoman’s current estimated net worth is around $15 million.

He owns a house having three bedrooms, two bathrooms, skylight, swimming pool, cabana, and a guest suite with a kitchen and also a Mercedes car which costs around $34,475.

Owain Yeoman and his wife on his Mercedes, Source: Zimbio

Moreover, his wife is a jewelry designer who earns a good amount of money from her designing career.