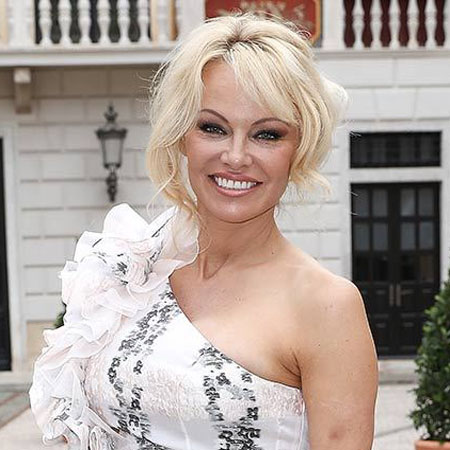 Pamela Anderson is a Canadian-American actress and model, well-known for her role Lisa on the television series Home Improvement.

Pamela was born as Pamela Denise Anderson on 1st July 1967 in Ladysmith, British Columbia. She was born to father, Barry, a furnace repairman, and mother, Carol Anderson, a waitress, and grew up along with her siblings. She was the first baby born on 1st July 1967 which got some press coverage as the country’s “Centennial Baby”

Anderson suffered from sexual abuse as a child by a female babysitter, raped by a 25-years-old man at the age of 12, gang-raped by her boyfriend and his friends at the age of 14.

She completed her high school graduation in 1985, from Highland Secondary School in Comox where she played on the volleyball team. She moved to Vancouver after graduation and worked as a fitness instructor.

Pamela featured on the Jumbotron wearing a Labatt’s Beer T-shirt at the BC Place Football Stadium and later hired by the brewing company as s spokesmodel. Sooner he appeared as the cover girl on Playboy magazine’s 1989 October issue and moved to Los Angeles to pursue a career in modeling.

Pamela spent 22 years in Playboy magazine and appeared more than any other model in Playboy covers. During her time in Los Angeles, she won a minor role on the tv series Home Improvement and eventually landed on Baywatch tv show for which she gained wide fame from international viewers.

Moreover, Anderson became a spokesperson for MAC Cosmetics’ MAC AIDS Fund in 2005. It helped people affected by AIDS and HIV. She also wrote an open letter to former president Barack Obama for urging the legalization of cannabis.

Moving towards Pamela personal life, she married several times. Firstly, she married to Tommy Lee, drummer, on 19th February 1995 in a beach. The couple welcomed two sons, Brandon Thomas Lee and Dylan Jagger and divorced in 1998. Later she engaged to Marus Schenkenberg, model, but broke up in 2001.

Pamela also engaged to Kid Rock, Singer, but broke up in 2001 and again she announced she would marry Kid on 29th July 2006 but divorce in February 2007. On 6th October 2007, she married Rick Salomon, film producer, in Las Vegas. The couple separated on 22nd February 2008.

Pamela earns the good sum of money in her career. She earned $1,320,000 for her appearance at the Baywatch TV shows for 22 episodes and received $550,000 from Bigg Boss for staying three days.

Pamela Anderson also obtains a decent amount of money from her modeling career. She gets a good sum of money from different endorsement. According to different sources, as per 2017, it is estimated that her current net worth is around $9 million.