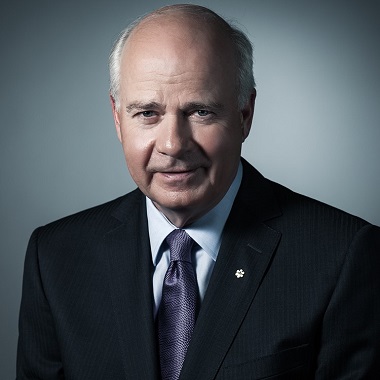 The winner of 12 Gemini Awards and an honorary doctorate from Mount Allison University, Peter Mansbridge is recognized as a Canadian Anchor. He is the chief correspondent for CBC News, anchor of “The National,” and host of CBC News Network’s Mansbridge One on One.

Peter Mansbridge was born on July 6, 1948, in London. His parents are Stanley Harry Mansbridge (1918-2005) and Brenda Louise (Harris-Jones) Mansbridge (d. 2008). His father served as decorated Royal Air Force Wing Commander and worked in Britain, Malaysia, and Canada. The family shifted to Canada after the Second World War. Peter grew up with his brother, Paul, and sister, Wendy.

Peter joined Glebe Collegiate Institute but dropped out before graduation. Then after, he served the Royal Canadian Navy from 1966 to 1967.

At the beginning of Peter’s career, he worked for Transair as a ticket agent at Churchill Airport, Manitoba. At the age of 19, he became the host of CHFC’S late night music program. He was hired as host by Gaston Charpentier, a station manager for the Local Canadian Broadcasting Corporation(CBC) radio station CHFC. He served in CHFC radio station for one year. 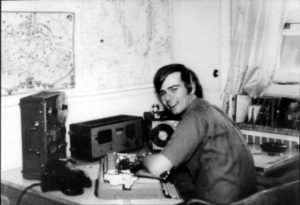 Peter Mansbridge at his first job at Churchill Airport Office
Source: the Star

Later, he moved to Winnipeg and joined CBWT-TV as a reporter.  Again, in 1975, he became a reporter for the CBC’S flagship evening news program “The National.” He also became the substitute anchor for Knowlton Nash. He was the announcer of CBC News “This week in Parliament” from 1981 until 1993. In 1988, after he was hired by CBS “Morning Show Host,” he retired from CBC in order to remain in Canada.

On May 1, 1988, he worked as sole anchor of “The National” and also as co-anchor of the CBC Prime Time News from November 1992 to Fall 1995. Between 1990 to 2000, Mansbridge has covered national and international events including The Gulf War, War in Kosovo, The Olympic Games, The Funeral Of Princess Diana e.t.c.

In 1999, he premiered a new talk show,“The Mansbridge One On One,” where he discussed and interviewed newsmaker.

Lately, he appeared as a host on “The National” throughout the week. After he retired from CTV, National News, on September 1, 2011, he became a longest-serving news anchor in Canada, serving in all three major news network. Peter is set to step down from anchoring “The National” on July 1, 2017. 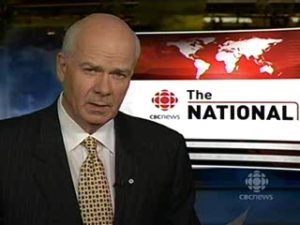 Peter as an anchor in “The National.”
Source: Puget Sound radio

Peter Mansbridge has married thrice. His first marriage was to Parm Dhillon. The Couple had two daughters, but still, marriage could not last long. They separated in 1975. On 6th January 1989, he got hitched to Wendy Mesley. They lived together until 1992. Their separation was in the limelight and caught massive media attention.

Again, after six years of separation from Wendy, he married Canadian Actress, Cynthia Dale on November 14, 1998. The couple is blessed with a son, William, born in 1999. Currently, he lives in Stratford with his family. He also enjoyed quality time in summer cottage, Gatineau Hills with his wife and children.