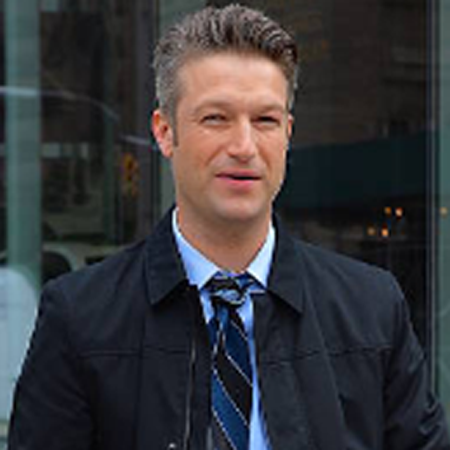 Peter Scanavino is an American actor. He is famous for playing the role of Detective Dominick Carisi, Jr. on the NBC series Law & Order: Special Victims Unit. Similarly, he is well known for his guest star roles in the series Person of Interest, The Good Wife, and The Blacklist.

Peter is a happily married to his longtime girlfriend, Lisha Bai. The couple welcomed two children till date.

Peter Scanavino was born on 29th February 1980 in Denver, Colorado, USA. He has a brother named David Scanavino, who is an artist by profession. Peter Scanavino attended culinary school and did an internship at the Michelin starred restaurant. He then attended the Boston University, Boston, Massachusetts, United.

Peter Scanavino made his debut in 2005, playing the role of Travis in the TV series, Jonny Zero. At the same years, he guest starred on the NBC crime drama series Law & Order: Criminal Intent in the fifth season episode Diamond Dogs.

Peter Scanavino’s big break came in 2006 when he played the role of Cult leader in the film Under Surveillance. He then went on to appear in the movies Deception (2008) and The Informers (2008). Since then, Peter Scanavino appeared in numerous movies and TV films.

On the set of The Informers:hotflick.net

On the set of  Law & Order: Special Victims Unit

Peter Scanavino is a happily married man. He got married to his longtime girlfriend, Lisha Bai. Though he has not shared many details about his marriage, he surprised everyone in 2016 when Peter Scanavino announced that he and his wife Lisha Bai welcomed their second child, a son named Leo.

Welcome to the world Leo pic.twitter.com/qP2OkDWoAi

Peter Scanavino announced the news and shared a photo of their newborn son, sleeping and all wrapped in a blanket through his official Twitter account. However, Peter Scanavino has not revealed their first child’s name on social sites.

Peter Scanavino earns a decent amount of wealth through his acting and brand endorsement. Allocating information from several sources as of 2018 it is found out that Peter Scanavino current estimated net worth is around $ 700 thousand.

Moreover, Peter also receives a decent amount of money from several fashion lines and brands as an endorsement. The actor is active in this industry since 2005 and had a handful of movies and TV series in his pocket. As he is still active, thus, no doubt Peter Scanavino’s income will go higher in coming days.