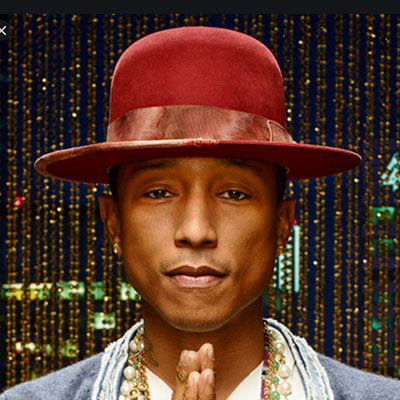 Pharrell Williams is an American singer, rapper, songwriter record, and film producer who is mostly known for his hit song, Happy. He is one half of the record production duo The Neptunes which produces soul, hip-hop, and R&B music. The talented artist is also the lead vocalist and drummer of the group N*E*R*D.

Pharrell Lanscilo Williams was born on 5th April 1973, in Virginia Beach, Virginia to parents Pharaoh Williams, a handyman, and Carolyn, a teacher. He is the oldest of three sons. Regarding his nationality, he is an American. His ethnicity is black.

Williams attended Princess Anne High School where he played in the school band. He met his friend and now business partner, Chad Hugo at seventh-grade summer grade. Williams was interested in music from a very young age and played keyboard and drums. He was also named Skateboard P by his friends. Later, he attended Northwestern University but dropped out after two years.

Williams and Hugo formed a band named Neptunes along with friends Shay Haley and Mike Etheridge during the early 1990s. The band was discovered by Teddy Riley and after high school, they signed with him. Williams then wrote a verse and helped to produce Wreckx-N-Effects 1992 hit “Rump Shaker”. The duo Williams and Hugo then signed a deal with Arista Records.

Eventually, the production duo began working under their old name Neptune. They gained popularity as they produced songs for famous artists like Backstreet Boys, Jay Z, Britney Spears, Usher, Madonna and many more. They became one of the biggest names in the music production field. Williams also has a record label named Star Trak.

Instagram: Pharrell Williams with his band members from N*E*R*D

Williams is also a member of the band N*E*R*D (Nothing Ever Really Dies). The band has released five albums to date including Seeing Sounds and Nothing. Their latest album is No One Ever Really Dies. Their albums and songs have been well received by people.

As a solo artist, William debuted his first single “Frontin’.” in 2003 which was a big hit.  He later followed up with his solo debut album In My Mind which was released on 25th July 2006. He went on to compose the soundtrack for the 2010 movie Despicable Me and later for its sequel Despicable Me 2.

Furthermore, Williams was featured on Daft Punk’s fourth studio album Random Access Memories including the mega-hit song Get Lucky. He also wrote, produced and sang in Robin Thicke’s single “Blurred Lines” which peaked at number one on the Billboard Hot 100.

Later, Williams released the first 24-hour long video for the song Happy from the Despicable Me 2 Soundtrack which earned him an Oscar nomination. He released his second solo studio album entitled Girl on 2nd March 2014. Additionally, William became one of the coaches for the seventh season of The Voice and stayed with the platform until 2016.

Apart from music, Williams has also taken part in different business ventures. He used the name I am OTHER for his additional ventures including a multimedia creative collective and record label, YouTube channel and apparel/textile lines. He has collaborated with many people like Nigo, Louis Vuitton, Emmanuel Perrotin, Takashi Murakami to bring out clothes, jewelry, furniture, sculpture respectively.

Later, Williams created his own line of Sunglasses for Moncler called Moncler Lunettes. He started a partnership with Adidas in 2014 and released his NMD “Human Race” collection on 23rd July 2016. He also released a collection for retail giant Uniqlo in April 2014.

Apart from that Williams also owns a non-profit organization called From One Hand To Another (FOHTA) which is an educational foundation with a mission to “change the world one kid at a time by giving them the tools and resources to meet their unique potential”.

Pharrell has many awards to his names. Some of them are listed down below:

Pharrell Williams is a married man. He is married to his longtime girlfriend, model/designer, Helen Lasichanh. The two got married in 2013. They first started off as friends but later their relationship developed into a romantic one. They dated for five years before Pharrell popped the question in 2012. Their wedding was a lavish affair with Usher and Busta Rhymes performing at the reception.

The couple has been going strong. They are supportive of each other’s endeavors. They welcomed their first son Rocky Williams in 2008. The two surprised their fans in 2013 with the next pregnancy. At the end of the term, they were blessed with triplets. The couple has decided not to reveal their names and gender hoping to give them some privacy.

The pair is very fashionable and has rocked many red carpets together with their unique styles. They have a loving relationship. There have been no rumors of the separation so far. Well, the parents of four are happily married.

Pharrell Williams has an estimated net worth of $150 million. The source of his income is his music sales, business ventures, and concert sales. His business ventures have earned him a good amount. His second solo album Girl is certified platinum in five countries. He earned a total of $32 million in the year 2015.

Williams owns a lavish and beautiful house in Los Angeles which is spread in an area of 4,415 square feet. He bought the house in 2015 at the price of $7.14 million. The house is sleek with 6 bedrooms and 5 and a half bathrooms. The stylish abode is very suitable for the fashionable singer.

Furthermore, the singer listed his Miami Penthouse for a whopping $16.8 million. The 9080 square foot Penthouse apartment has 360 views from floor to ceiling with glass walls. The property was sold for $9.25 million in 2016.

As for cars, Pharrell owns a $45,000 Rolls Royce Phantom. He also has a Black Ferrari Enzo which is priced at $2.4 million. Pharrell has other cars in his collection like Mercedes Benz SLR ($500,000), Rolls-Royce Drop Head Coupe ($550,000), Porsche 550 Spyder($6million). His car collection is very impressive and consists of luxurious cars.

Well, Pharrell is a very wealthy man. He is still active in his career. At the moment he is busy making new music with his band N*E*R*D. He is a smart business person. We can expect to see an increase in his net worth in the upcoming days.