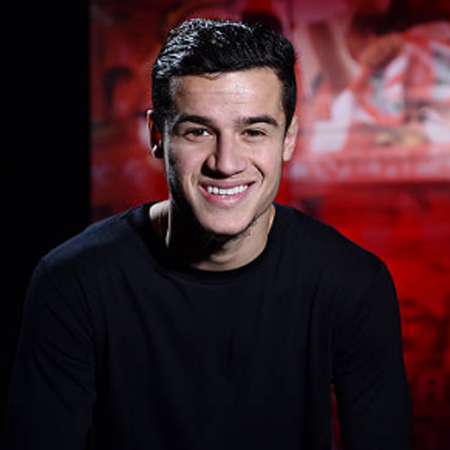 Philippe Coutinho is a pro footballer from Brazil. He is a midfield attacker or winger playing for the Spanish club Barcelona and the Brazilian national team.

Coutinho is living a contended and blissful married life with his wife. Not only his professional life but he has well managed his personal life as well giving adequate time to his family.

Coutinho was born Philippe Coutinho Correia on 12 June 1992 in Rio de Janeiro. He is the youngest son of Esmerelda Coutinho and architect Jose Carlos Correia. He grew up in the northern Rocha district of Rio along with his elder brothers Cristiano and Leandro.

Philippe developed the interest in football after playing futsal at a local concrete football pitch. He then went to football academy and later joined the Vasco da Gama youth system when his father was approached by coaches in there.

Coutinho began his career as a pro after joining the Internazionale in 2010. He soon made his official debut match as a substitute in the 2010 UEFA Super Cup against Atletico Madrid. He scored his first goal for Inter with free-kick and winning the match by 3-1 against Fiorentina. He scored 5 total goals out of 31 matches for the team.

Afterward, Philippe played with Espanyol of La Liga club under the manager, Mauricio Pochettino in a loan. He scored 5 goals in his 16 appearances for the team. In 2013, Liverpool signed for him and he soon made his debut replacing Stewart Downing with the 2-0 victory over West Bromwich Albion. He bagged his first goal for Liverpool winning the match against Swansea City by 5-0 over. He then went on to play for the team with the number of goals.

Countinho later transferred to Barcelona in 2018. His first match with Barcelona was in the Copa del Rey winning the match by 2-1 against his former RCD Espanyol. He took rest for almost three weeks due to his thigh injury before playing for Barcelona. The talented and skillful player Philippe played as an attacking midfielder, second striker and on the flanks providing assists for teammates.

Philippe made his international debut in a friendly match against Iran. He ensured the qualification of Brazil in 2018 FIFA World Cup with a 3-0 victory against Paraguay.

Coutinho is a married man. He met his wife Aine for the first time at a friend’s party.  The duo dated for some time before tying a knot in 2012. The ceremony was held in Brazil in presence of close friends and family.

The couple is blessed with a beautiful daughter named Maria Coutinho and son,  Philippe Coutinho Jr. together. He is quite committed to his wife and children giving them equal time out of his busy life. He loves and adores his family very much and has made tattoos starting from his fingers running up to his biceps in the name of his parents, brothers and his beautiful wife.

Philippe being a football player earns a good amount salary from his career. He holds the staggering net worth of $20 million. He was signed by International in €4 million. Liverpool signed for Philippe on the long-term contract in £8.5 million fees. Later on, he was transferred to Barcelona on £105 million. His increasing demand in the field proves that his worth is much more than millions he is getting now.