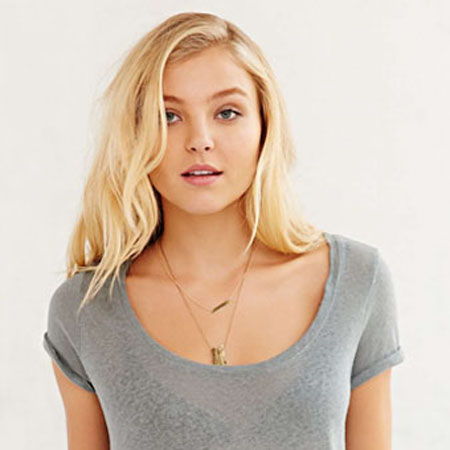 She also has a brother named CJ, who works as a Vegas VIP promoter. Regarding her education, she is a competitive dancer and skier during her high school. She graduated from Webster Thomas High School in 2013.

Rachel Hilbert started her modeling career at the age of 16 when she was discovered from an open call. Later on, Victoria’s Secret PINK started looking at her when she was 18, and it was probably one of the best things that have ever happened in her career. She did an in-house, kind of photo shoot for them.

Dreaming of this while nyc is freezing!!! ???????? @victoriassecret @vspink

Then she just kept shooting with them and got signed to be the face of PINK. That started her whole career. Moreover, Hilbert was cast in one episode of TV Series, Younger in 2015. Likewise, she worked in a music video “lose my mind” where she assumed the role of a nurse.

Furthermore, Rachel Hilbert appeared in Summer/Winter Fashion Week in New York where she walked the ramp for Chris Benz and Elie Tahari. In 2015, she became a spokesmodel for Victoria’s Secret’s image PINK. She additionally walked in the Victoria’s Secret Fashion Show.

????Rehearsals are over and we’re just hours away to see super cutie @rachel_hil at the #VSFashionshow on CBS 10/9c . pic.twitter.com/X6easkiMxW

Likewise, Rachel Hilbert has been included in International versions of Elle, Marie Claire, and Cosmopolitan. Aside from Victoria’s Secret line PINK, she has worked with different brands, for example, Urban Outfitters, Target, Macy’s and some more.

Rachel Hilbert is in a relationship with Brett Eldredge in 2015. She met her boyfriend when she played the nurse role in his Lose My Mind music video. Her boyfriend is an American country music singer, songwriter, and record producer.

But this is not her first love, she previously dated Cody Simpson, who is an Australian singer, songwriter, musician, dancer, and actor. Besides that, she enjoys practicing yoga and pilates, boxing, dancing, and reading.

Rachel Hilbert generates a huge income from her television networks, magazines and advertisement agencies. Rachel Hilbert’s net worth is estimated to be around $1 million, and she still has a long career ahead of her.