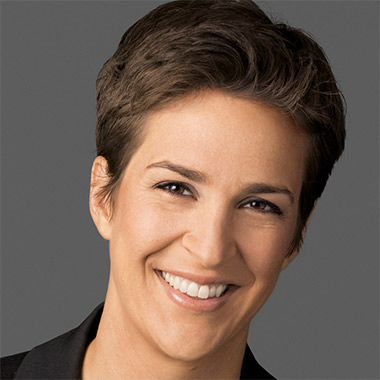 Rachel Maddow is an American television host, author as well as political commentator. She currently hosts a nightly television show called The Rachel Maddow Show which airs on MSNBC. Her talk radio program of the same name airs on Air America Radio. She became the first openly gay anchor who hosted a major prime-time news program in the United States.

Rachel was born on April 1, 1973, in Castro Valley, California, United States. She was born to Robert B. “Bob” Maddow and Elaine Maddow. Robert was the United States Air Force captain. She also has an older brother named David. She follows Catholic religion. While she was in high school she used to play swimming, volleyball, and basketball.

She attended Castro Valley High School and graduated from there. She then studied at the Stanford University. While she was a freshman, her interview was published by the college newspaper. She won the John Gardener Fellowship award at her graduation. Since 1995 she started her postgraduate study at Lincoln College, Oxford. She won an international Rhodes Scholarship and became first openly gay American to win an award. She attended Oxford University and earned a Doctor of Philosophy degree in politics.

She first worked at WRNX as a radio host. She took part in a contest to find a new sidekick of Dave Brinnel show’s host. She eventually won the contest. For two years she hosted Big Breakfast on WRSI. In March 2004 she joined the new Air America after leaving the show Big Breakfast. She started working as host of Unfiltered with chuck D and Lizz Winstead. She then started working in weekday two-hour radio program, The Rachel Maddow Show. The show began airing from March 2008. In September 2008 the show’s length returned to two hours. She renewed her contract with Air America in February 2009. On January 21, 2010, her last Air America show was aired.

She began working on the MSNBC show Tucker in June 2005. She frequently appeared on CNN’s Paula Zahn Now show as a guest. She was also a correspondent for The Advocate Newsmagazine. In January 2008, she started working on MSNBC’s Race for the White House with David Gregory as a political analyst. She also contributed on Countdown with Keith Olbermann. She became substitute host for Countdown with Keith Olbermann in April 2008. In August 2008 it was announced that The Rachel Maddow Show would substitute Verdict with Dan Abrams.

She has a partner named Susan Mikula. The couple lives in Manhattan and western Massachusetts. They first met in 1999. They had their first date at a National Rifle Association. Rachel Maddow has an estimated net worth of $20 million dollars.

She won an Emmy Award. In 2008 she was listed as “gay men and women who moved culture” by Out magazines. In 2009 she was awarded a Gracie Award. In the same year, she won the nomination for GLAAD’s 20th Annual Media Awards. She received a Proclamation of Honor on March 28, 2009. She won the 21st Annual Glads Media Awards in March 2010. In the same year, she was given an honorary Doctor of Laws at Smith College. She also won the Walter Cronkite Faith & Freedom Award in August 2010. She also won the John Steinbeck Award in February 2012.