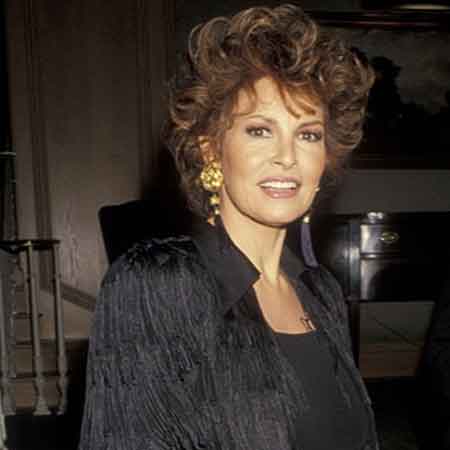 An American actress and singer, Raquel Welch is best-known for her role in Fantastic Voyage. With a start of her career at the age of 7 in the show business doing ballet, Raquel came to rise as one of the world’s great beauties.

After her divorce with husband Richard Palmer, she is in a relationship with another guy? So if you are interested to know about Raquel’s married life, divorce, affair, dating, net worth, salary, career, early life, and education, keep scrolling.

Raquel Welch was born on 5th September 1940 in Chicago, Illinois to Armando Carlos Tejada Urquizo– Father and Josephine Sarah– mother as Jo Raquel Tejada. She also has a young brother and a young sister.  When Raquel was 6 years old,  her family moved from Illinois to San Diego, California.

Raquel studied ballet form the age of 7 to 17 years old but gave up after her instructor said that she didn’t have an appropriate figure to be a ballet dancer.  During her high school level, she won the beauty titles as Miss Photogenic and Miss Contour.

During Raquel’s college level, she won several parts in local theater production. She was also offered the job of weather forecaster at KMFB but in 1963, she moved to New York City form Dallas and again back to Los Angeles. She started playing for her role with the movie studio.

During her struggling period, she met a Hollywood agent Patrick Curtis who develop a plan to turn Welch into a sex symbol. And eventually she became an icon in the late 1960s and 70s for her roles as sexy and a strong heroine.

Raquel became popular after her role in a doeskin bikini for the movie  One Million Years BC- which became one of many scantily clad portrayals of Rachel. In 1998, she became No.3 in “Sexiest Star of the 20th Century” list and in 2011,”Hottest Women of all time”.

Raquel was also selected as the new face for MAC cosmetic beauty icon in 2007 and also has written book related to health and fitness.

In 1959, Raquel tied the knot with her high school sweetheart James Welch.  And form her first husband, she got her name Raquel Welch. They were married for 5 years and also has two children together but unfortunately, they were separated in 1964.

After getting a divorce from James, she was married to Patrick Curtis– a producer from 1967 until 1972. Again after facing a non-success marriage with Patrick, she got married to Andre Weinfeld from 1980 until 1990.

Afterward, Raquel was married to restaurateur Richard Palmer in 1999 but in 2003 they separated. When Raquel was asked about her 4 failure marriage, she thinks her marriage doesn’t work out because she is too set in her ways. As she likes what she does and really enjoys being what she is.

So at present, Raquel is living a single life. We hope she will soon find her true soul mate who will understand her the way she is.

The pop culture icon, Raquel has been one of the Hollywood’s sexiest pin-up and has accumulated a huge sum of money form her acting and modeling career. As she has a net worth of $30 million. She also earned $60,000 form her role in the movie Spara Forte, Piu Forte in 1966. She also earned $150,000 for her role in Bluebears in 1972.

Back in 2017, she sales her house located in the Beverly Hill Post Office area at $5.695 million. She brought the house in 1997 for $2 million.  She lives in another red- clay roofed mansions which is about 6 miles away in Beverly Crest.