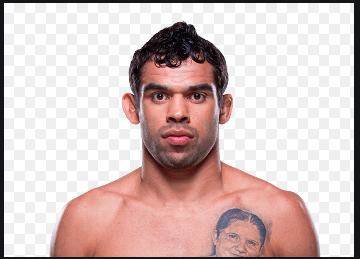 Nascimento Mota Pegado mostly known as Renan Barao is a mixed martial artist with Brazillian Jui Jutsu Background. He is the former UFC Bantamweight Champion. He has a record of 34 wins, 6 losses and 1 no contest.

Renan Barao was born on 27th February 1987, in Natal, the Rio Grande do Norte, Brazil. His father, Netinho Pegado is a well-known boxer in the region. His grandmother gave him the nickname Barao after her favorite character of the Brazillian soap opera show “Sinha Moca”.

Barao’s education has not been revealed. He started his fight-training at a very young age with his father. He started his boxing training at the age of 14. Later, he starting learning Jui Jitsu. Barao’s focus has always been on fighting.

Renan Barao started his career in a sports school in his hometown named Kimura Nova Uniao. He began his training for MMA. He began his professional career in 2005. He competed for Shooto Brazil and other small organizations in Brazil. He received a black belt in Brazillian Jiu-Jutsu from Andre Pederneiras in September 2011.

Barao made is WEC in a Bantamweight bout against newcomer Anthony Leone and won the battle. Later, when WEC merged with the UFC, Barao won his debut fight against, Cole Escovedo.

Barao went on to become the Interim UFC Bantamweight Champion in a fight against Urijah Faber. Furthermore, he defended his title two times against Michael McDonald and Eddie Winland.

Later, Barao won the UFC Bantamweight championship in 2014 as the title holder Dominick Cruz had torn his groin. Barao then successfully defended his title against Urijah Faber. However, he later lost his title to T.J. Dillashaw on 24th May 2014.

Barao went on to fight in Featherweight division against Jeremy Stephens but was defeated. He later faced Phillipe Nover and won the fight.  There had been controversies regarding his weight. He returned to the Bantamweight division facing Alijamain Sterling but lost the bout.

It is not known whether Barao is already married or single. He has not shared his marital status with the world. However, he has three children. His first daughter was born in 2012. Nevertheless, the identity of their mother is unknown.

Barao may already be married and if so he has kept his married life under the wraps. He is a good father and spends some quality time with his children. He has a happy family who supports him in his career.

Renan Barao earns a good sum of money in his career. The MMA fighter earned $50,000 for the fight against T.J. Dillashaw. His main source of income is the earnings from the bouts.

Barao has also been sponsored by Reebok. He owns an apartment. His luxury purchase includes a house for his mother. He has a good lifestyle and is able to support his family. He is still active in his career so we can assume his net worth may increase in coming days. Allocating information from several sources as of 2018 it is estimated that his current net worth is around a million dollar.