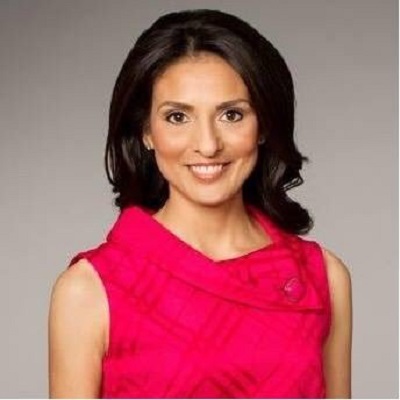 Rosa Flores is an American news correspondent. Active in this field of journalism since 2005, she has contributed on the channels like CBS’s ‘KWTV-DT,’ KHOU-TV, and NBC. Currently, she is working as a news correspondent for CNN.

Rosa and her husband have been wedded for a long time, and their marriage is going very well. But as of now, there are no any details about her husband’s identity.

Rosa Flores was born in the United States of America. She is very close to her parents as she often shared a photo on her Instagram account. Flores grew up with her sister and attended Progreso High School.

During her childhood with her father and sister: Instagram

Happy Father’s Day, Dad! In this pic my Dad and sister celebrate my graduation in Relampago, #texas #rgv #happyfathersday

Then, she got enrolled in the University of Texas at Austin. She earned her Bachelor’s degree in ‘broadcast journalism’ and ‘business administration.’ Moreover, graduated with a Master’s degree in accounting.

Rosa Flores began her career working in an accounting firm, ‘KPMG’ in 2003. Then, she reported for KHOU-TV and KWTV-TV in Oklahoma City from 2005 to 2010. Then, Rosa Flores moved to Louisiana’s capital city, where she covered enterprise and breaking news stories at WDSU-TV, the NBC branch in New Orleans in 2012.

Her broadcasting involved excellent coverage of the BP oil spill in the Gulf of Mexico. Moreover, from 2012 to 2013, she anchored the 4 pm newscast at WBRZ-TV, the ABC affiliate in Baton Rouge.

In 2013, Flores joined CNN, covering domestic and international news stories. Since her joining CNN, she has covered Pope Francis, from the papal plane, during his visit to the United States. She also traveled to Paraguay and Ecuador, Bolivia to report Francis’ visit to South America. Flores reported President Obama’s visit to Argentina and even his attendance at the Seventh Summit of the Americas in Panama.

So humbled to share my journey from accounting to reporting and my humble beginnings with my colleagues at @CNN during today’s #cnncareertalk Thanks to ALL OF YOU for helping me live my dream of telling stories every day. We are on the #yellowbus together:) #cheeringyouon

Moreover, Flores went to Cuba to report the reestablishment of connections between the US and Cuba. Besides that, Flores also traveled to Rio de Janeiro, Brazil to cover the Rio Olympics game. Furthermore, she also fills international breaking news stories containing the detention of five Syrians in Honduras traveling with fake passports, an explosion of a Mexico City maternity hospital, and the influx of abandoned minors across the US southern border.

Inside a Hurricane Maria evacuee flight: These families are separating from their families for the greater good,… https://t.co/o0IzXA1RMN

Moreover, In 2014, she filled nearly three weeks in Mexico’s southern state of Guerrero reporting the disappearance of the 43 lost students of Ayotzinapa. Her coverage settled her the National Association of Hispanic Journalists’ Large Market Television Hard News Award.

Rosa Flores is a well-known name in the journalism field. With her incredible talent and amazing looks can amaze any kind of men. Her fans are very curious to know about her relationship status whether she is married or dating anyone. Well, she is a happily married woman.

I love this man! #hubby

Rosa and her husband have been wedded for a long time, and their marriage is going very well. But as of now, there are no any details about her husband’s identity. So we can only wait until she reveals this information.

Allocating information from several sources as of 2018 it is found out that Rosa Flores current estimated net worth is around a million dollar. She is very active in her social account and to know more about her you can catch her on social networking sites like Facebook, Twitter, and Instagram.