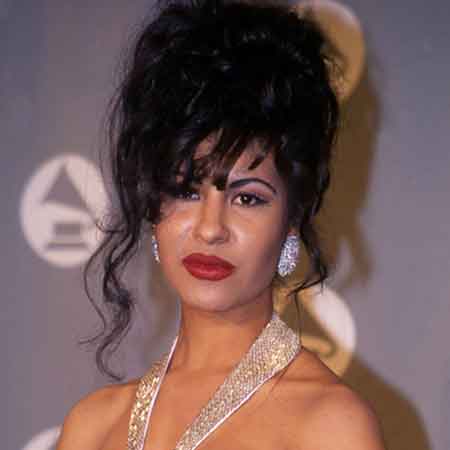 Selena Quintanilla-Perez was an American singer, songwriter, spokesperson, model, actress, as well as a fashion designer. Perez was married to an American guitarist Chris Pérez.

Perez was also called as the Queen of Tejano music and was one of the most celebrated Mexican-American entertainers of the late 20th century. Perez died in 1995 due to a Gunshot wound. Camo la Flor, Si Una Vez etc are some of her popular songs.

Selena Quintanilla-Perez was born on 16th April 1971, in Lake Jackson, Texas, United States. She was the youngest child of her parents, father Abraham Quintanilla Jr. and mother Marcella Samora. Her father is an American singer-songwriter. Perz grew up along with her elder brother Ab Quintanilla and sister Suzette Quintanilla.

Selena Quintanilla-Perez made her music career debut in 1980 by joining the band Selena y Los Dinos along with her siblings. In 1987, Perez won a Tejano Music Award for Female Vocalist of the Year. Likewise, she released her self-titled debut album in 1989.

Ven Conmigo, Entre a Mi Mundo, Dreaming of You etc are some other albums of Perez. On the other hand, she also starred in television series such as Dos Mujeres, un Camino, Latin Nights, etc. Besides her singing and acting career, Perez was also the owner of Selena Etc. boutiques.

Selena Quintanilla-Perez was married to Chris Perez. Her husband Chris is an American guitarist. The couple dated for several years before getting married. On 2nd April 1992, Perez and her boyfriend, Chris eloped after her father raised concerns over their relationship. The lovebirds married the same year.

It was the first wedding for Perez but for her spouse Chris, it was the second. Her husband, Chris was previously married to Venessa Villanueva. As the couple was married, they did not have any children from their marital relationship. The husband and wife were together until the death of Perez in 1995.

Selena Quintanilla-Perez died at the age of 23. The cause of her death was due to a Gunshot wound. On 31st March 1995, Perez met Yolanda Saldívar, her friend and former manager of her Selena Etc. boutiques at her hotel room in the Days Inn in Corpus Christi and demanded the financial papers.

But Saldivar shot Perez on the right lower shoulder which caused a severe loss of blood. Perez was taken to Corpus Christi hospital. Doctors carried out “erratic heartbeat” but after 50 minutes of surgery, she was pronounced dead from blood loss and cardiac arrest.

Selena Quintanilla-Perez had the net worth of $10 million. A Grammy Award winner Perez earned a decent amount of money from her multiple profession. She had released numbers of albums as well as singles.

Most of her songs were popular. On the other hand, Perez was also an owner of Selena Etc. boutiques, through which she added more money.