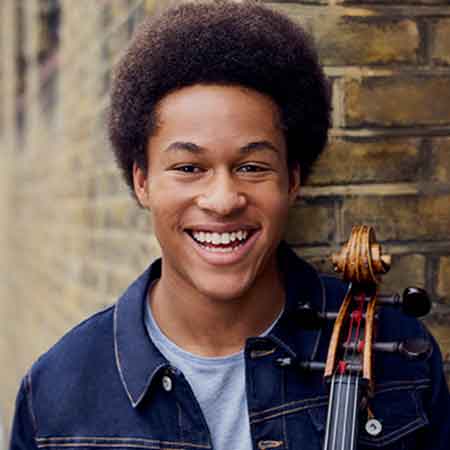 The young British Cellist, Sheku Kanneh-Mason is a talented individual who won the BBC Young Musician of the Year in 2016. He is the first black musician to win the prestigious award. In recent events, the musician played the cello in the Royal Wedding of Prince Harry and wife Meghan Markle.

The 19-year old is currently single. He has not had a public relationship yet. However, Kanneh-Mason is close to his family. Today, we will be exploring his life, career, accomplishments, wedding, marriage, affairs, nationality, siblings, child, personal life, family life, relationships, net worth and more; so stay tuned.

Sheku Kanneh-Mason, a native of Nottingham, England was born in 1999. He is the son of Stuart Mason, a business manager, and Dr. Kadiatu Kanneh, a former university lecturer. He is the third child among seven children. His siblings are involved in music as well. Furthermore, he is of British nationality. His ethnic background is black.

Kanneh Mason began playing cello at the age of nine. He won the Marguerite Swan Memorial Prize for acquiring the highest marks in his eighth-grade cello examination. His musical talent helped him to get ABRSM junior scholarship to join the Royal Academy of Music.

The musician attended Trinity School in Nottingham. He completed his A Levels in Music, Maths, and Physics from the school.

The musician was first discovered when he took part in Britain’s Got Talent along with his siblings. The group called themselves the Kanneh-Masons. In May 2016, he won the BBC’s Young Musician of the Year contest.

Aside, Kanneh-Mason was also a member of the Chibeke! Orchestra. The project was founded by Chi-Chi Nwanoku for black and minority ethnic musicians. The musician signed a major recording deal with classical music label Decca Classics in November 2016. His debut album Inspiration was released on January 26, 2018.

Kanneh-Mason performed at British Academy Film Awards (BAFTA) in 2017 and 2018. He also performed at the royal wedding of Prince Harry and Megan Markle on May 19, 2018, in St.Geaorge Chapel at the Windsor Castle.

He was personally asked by now Dutchess of Sussex, Meghan Markle. The musician performed Franz Schubert’s “Ave Maria,” Gabriel Fauré’s “Après un rêve” and Maria Theresia von Paradis’ “Sicilienne” which much fervor in the wedding day. His royal musical performance has garnered a lot of attention.

In June 2018, he won both the Critics’ Choice Award and Male Artist of the Year at the Classic BRIT Awards.

Kanneh-Mason is not a married man. He is still quite young. The musician is seemingly single. He has not had public relationships yet. He has not shared any pictures with potential partners as of now. Aside, the musician shares a strong bond with his family. He has shared pictures with his sister.

The young cellist is more focused on his career. He is achieving great things and it is keeping him busy. He could be dating someone privately but it is not something we can be sure of at the moment.

The net worth of Kanneh-Mason is currently unknown. The source of his income is his musical performances and record sales. The musician has won a lot of hearts with his musical prowess. The exact figures of his salary have not been disclosed yet. Nevertheless, we can assume that he earns a hefty amount since he has performed in many prestigious events including the Royal Wedding.

The musician leads a comfortable lifestyle. He is currently studying in the Royal Academy of music. The musician has made a name for himself in the industry.