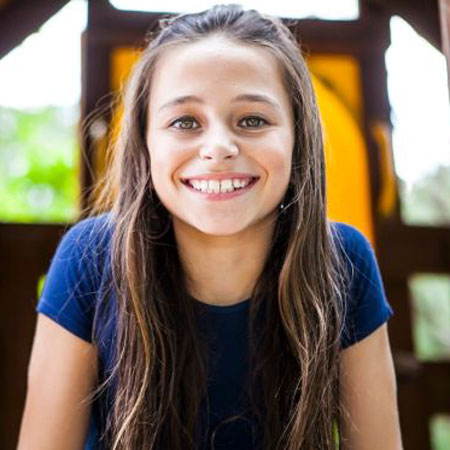 Skylar Katz is an American teen sensational rapper, actress, and composer. She is well known for playing the role of Tess in the series, Raven’s Home. Moreover, she is famous as the contestant on season 11 of America’s Got Talent.

Skylar Katz‘s fans are very curious to know about her personal life, but she just 13 years old and she is focusing on her career rather than a relationship.

Skylar Katz was born on 12th December 2004, in Melville, NY. Both of her parents grew up in Queens around some of the hip-hop legends. She has three siblings; Hailey, Madison, and Dylan. She grew up listening to rap music and began to rap at the age of five.

Skylar Katz as a kid

Skylar Katz discovered her talent and passion for rapping at the age of 5. Sky participated as a contestant on season 11 of America’s Got Talent in 2016. In this show, she performed with her single Fresh and Hater, where she wowed the judges, audience members and received critical acclaim and positive reception worldwide.

Shortly, she got thousands of followers from across the globe on her Instagram and YouTube pages. Moreover. Katz featured in Newsday, and LUCID Magazine.

Skylar Katz is a big fan of famous rapper Nicki Minaj. In 2017, she appeared in the FM radio station 92.3 AMP Radio as a guest. Sky has kept the energy up ever since with her energetic, intelligent, and dynamic style with an old-school chemistry.

Apart from that, Skylar Katz also appeared in the Disney Channel series, Raven’s Home, playing the role of Tess (a rapper) in 2017. Similarly, she also starred in the Home & Family (2012) and Harry (2016). Besides that, Katz is a member of the American Society of Composers, Authors and Publishers (ASCAP).

Being a sensational teen star, Skylar Katz can amaze any man. With her unbelievable rapping style, she already grabbed millions of hearts. Moreover, Skylar Katz‘s fans are very curious to know about her personal life, but she just 13 years old and she is focusing on her career rather than a relationship.

Thus, she is possibly single. In her spare time, she loves to spend her time with family and friends.

Being a rising star, Skylar Katz surely earns her salary from her career as a rapper and actress. However, her estimated net worth is still unknown to us. But, as Skylar Katz is still active in this field thus, no doubt, her net worth will go higher in coming days. To know more about Skylar Katz, follow her on social networking sites.