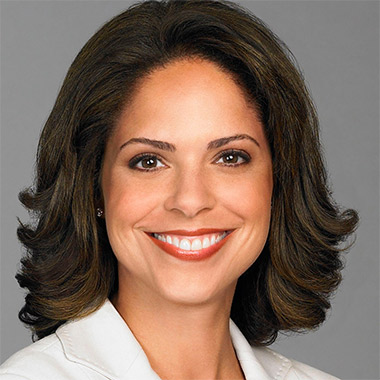 Soledad O’Brien is an American broadcast journalist and executive producer. She is the chairman of Starfish Media Group, a multi-platform media production company, and distributor. O’Brien continues her television work as an anchor and correspondent for CNN, HBO, and Al Jazeera America news program America Tonight. She also served as executive producer and moderator of the National Geographic Bee.

She was born on September 19, 1966, in St. James, New York, United States. Her birth name is Maria de la Soledad Teresa O’Brien. Her father is of Irish descent and mother is Afro-Cuban. She is the fifth of six children of her parents.

She started working at the NBC affiliate in Boston, WBZ-TV as an associate producer and news writer. In 1991 she joined NBC News for Nightly News and Weekend Today as a field producer. She then worked for KRON as a local reporter and bureau chief for three years. In 1996 she anchored MSNBC’s weekend morning show and technology program The site. Since July 1999, with David Bloom, she co-anchored Weekend Today. She also has covered the 1990’s school shootings in Colorado and Oregon and John F. Kennedy Jr.’s plane crash.

She then moved to CNN and started co-anchoring morning program American Morning from New York City with Miles O’Brien. She then was replaced by former Fox News anchor Kiran Chetry on April 16, 2007. She completed the documentary “Latino In America” in 2009. She hosted “In America” documentaries for CNN. In July 2007 she anchored Black in America. On January 2, 2012, she began anchoring starting Point. On February 21, 2013, it was announced that she will leave Starting Point. Her last day at CNN was on March 29, 2013. On June 12, 2013, it was announced that she would join HBO’s Real Sports with Bryant Gumbel sports newsmagazine.

She is a happily married woman. She got married to Bradley. The couple together is blessed with daughters Sofia and Cecilia and twin sons named Charles and Jackson. When she started working in TV, she was recommended to change her name by many people but she refused. She belongs to a mixed ethnic background.

O’Brien was awarded Peabody Awards for the coverage of Hurricane Katrina. She also won Alfred I. DuPont-Columbia University Award. For co-hosting the Discovery channel’s The Know Zone, she was awarded an Emmy award. She has won Emmy Award for the coverage of Kids on Race, Haiti earthquake, and 2012 election. She then was honored with NAACP President’s Award in 2007. As she is the member of the National Association of Black Journalists, in 2010 she was named Journalist of the Year. She is also the member of The After-School Corporation. In February 2011 she was honored with Delta Sigma Theta sorority. In 2001 she was named as one of the 50 Most Beautiful by People’s magazine. She was also named as one of the Top 100 Irish Americans by Irish American Magazines. Catalina magazine awarded him with Groundbreaking Latina of the Year. She was honored with Doctor of Humane letters on May 18, 2014.