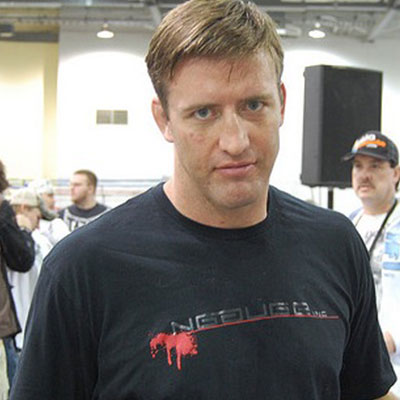 Widely popular by his nickname, the American Psycho, Stephen Patrick Bonnar is currently in contact with the Bellator MMA. He is a professional wrestler and a veteran mixed martial artist. He is also a UFC Hall of Fame title holder.

Married to wife, Andrea Brown in 2009, the husband and wife have a son together. Stephan has also worked as an actor and stuntman in several movies and TV series. He has starred in Supreme Champion, LIE, Warrior, and Salt.

Stephen was born in Hammond, Indiana, the United States on 4th April 1977. He was raised in Munster, Indiana where he spent most part of his childhood.

Stephen Bonnar was interested in martial arts since he was a boy. He began his training for wrestling when he was 10 years old. Likewise, he also got training in Tae Kwon Do when he was 12 and Brazilian Jiu-Jitsu when he was 22. When he was 24, he received training in Muay Thai and boxing as well.

He was enrolled in Munster High School, Indiana, where he was an active participant in several sports. In 2000, he was accepted at the Purdue University, he graduated with an undergraduate certificate in Sports Medicine.

Bonnar’s early career began since his high school after winning two-time Golden Gloves Championship. He has a black belt in Tae Kwon Do.

Stephen’s career rose up after he lost a match to Forest Griffin, despite his loss, Bonnar exhibited very sound fighting skills and was given the contract with UFC. Under Ultimate Fighting Championship: Ultimate Fight Shows, Bonnar presented his excellent sportsmanship and defeated many prominent players.

A rematch was scheduled between Bonnar and Griffin on August 2006. Bonnar again lost the fight to Griffin. Bonnar has played a total of 15 matches for the UFC where he has secured the win of 8 matches in total.

On 30th October 2012, Stephan announced that he was retiring from the MMA. After his retirement from the MMA, it was announced by the president Dana White that his name was indicted in the UFC Hall of Fame in 2013.

After his retirement from the UFC, he signed a deal with the Bellator MMA. His most recent match was with Tito Ortiz in 2014. Bonnar lost the match.

He has also done several movies. He has starred in Supreme Champion, LIE, and Warrior. He was a stuntman in the popular movie Salt

Stephan is married to his wife Andrea Brown in 2009. They dated for a long time before getting tied down. They got married in a very romantic spot, Tuscany, Italy.

The couple has one son together named Griffin Brandon. They named him after Stephan’s late brother, Brandon. In an interview, Stephan said that his favorite band is The Who and he has used their music for his entrance.

It is speculated that Stephan has a net worth of $500,000 USD. His contract with the UFC was a six-figure amount, though the exact number is not known.

Bonnar is also a co-founder of N Gauge Inc, a job he took after his retirement from MMA. He is in day trading right now. He must have earned a very good number before his retirement as he was one of the star players. Moreover, He is also a personal trainer.