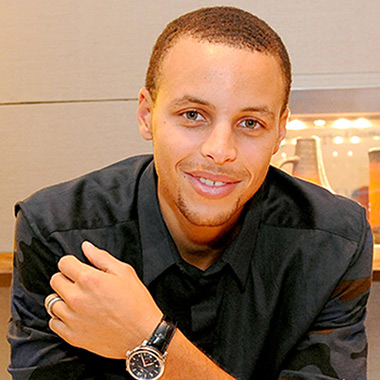 Stephen Curry is an American professional basketball player born as Wardell Stephen “Steph” Curry II on March 14, 1998. He is currently playing for Golden State Warriors of the National Basketball Association (NBA) and the Most Valuable Player (MVP) of NBA 2015. He is a brother of NBA player Seth Curry and son of former NBA player Dell Curry.

Stephen was born in Akron, Ohio but his hometown is Charlotte, North Carolina, and spent his childhood there with his parents Dell and Sonya, and his brother Seth. Dell used to take Seth and Stephen to warm-ups and games and shoot around with them. He went to Montessori school opened by Sonya.

He lived in Toronto while his father played for Toronto Raptors and attended Queensway Christian College in Etobicoke, Ontario. He used to be a member of the basketball team for grade 7 and 8 and was a most important player.

Curry was selected in 2009 NBA draft by Golden State Warriors. In 2012/13 season Curry set the new NBA record for three-pointers made with 272 break his own record in 2014/15 season with 286 three-pointers and titles Most Valuable Player for NBA 2015. This season also recorded for Golden States Warrior won 67 wins in a single season which is NBA-best and won their NBA championship since 1975 in the same year.

His college awards are SoCon player of the year in 2008 and 2009, Consensus first-team All-American (2009), SoCon Conference Tournament Most Outstanding Player (2007-2008), SoCon Freshmen of the Year and SoCon All-Freshmen Team 2007.

Golden State Warriors selected Curry in 2009 NBA draft and debuted on October 28, 2009. In 2009/10 he was nominated for NBA Rookie of the Year Award but Tyreke Evans bagged the title. He is also MVP player of the year 2015.

In 2012/13 season Curry signed four-year contract with Golden warriors for $44 million. Curry scored the highest score of his career to New York Knicks with 11 3-pointers with 54 points but lost the game. He also made the highest three-pointers in a regular season (272) which is 3 more than Ray Allen.

Curry is Christian and believes in god. Curry married Ayesha Alexander on July 30, 2011, in Charlotte, North Carolina, and have two daughters together living in Orinda. Curry wears jersey No. 30 as his father used to wear. As of 2016, Stephen Curry’s net worth is $35 million dollars.