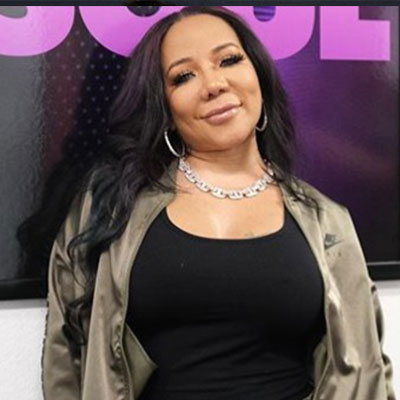 An American singer-songwriter, Tameka Cottle has gained a wide popularity for being a member of the American multi-platinum R&B vocal group, Xscape. Cottle is further known for her writing contributions on the TLC hit No Scrubs for which she received a Grammy Award.

Due to her small stature of 4’11”, Cottle has acquired the nickname, Tiny. Cottle was previously married to an American rapper, T.I with whom she has three children. Furthermore, she also has a daughter from her another relationship with Zonnie “Zeboe” Pullins. Scroll down to know in details about Cottle’s early life, education, career, net worth, awards, achievements, salary, earnings, personal life, affairs, relationships, marriage, children, and divorce.

Tameka Cottle was born on July 14, 1975, in College Park, Georgia, United States. Her mother Dianne Cottle is a Caucasian and father Charles “Speedy” Pope was an African American. Cottle’s father and uncle formed the R&B group, The Tams.

In 1992, Tameka Cottle joined the R&B quartet Xscape while she was attending at Tri-Cities Performing Arts High School. As a new member of the group, Cottle contributed in three albums of the band including  Hummin’ Comin’ at ‘Cha, Off the Hook, and Traces of My Lipstick.

Likewise, being the member of Xscape, Cottle received several awards such as two Soul Train Music Awards for Best New R&B Artist and Best R&B Album and the A-Town Music Award for Best Duo/Group. Cottle has given her lead vocals on Xscape’s hit songs including Understanding, Do You Want To?, All I Need, Love’s a Funny Thing etc.

Moreover, Cottle has further recorded soundtracks for Soul Food, Panther, Bad Boys, and Love Jones. For her writing contributions on the TLC hit No Scrubs, Cottle and her fellow former Xscape group member, Kandi Burruss received a Grammy Award in 2002.

The 42 years old, Tameka Cottle was previously in a relationship with Zonnie “Zeboe” Pullins in 1992. The couple also has a daughter Zonnique Jailee Pullins born on March 20, 1996. Zonnique is also a musician. However, the couple weren’t able to continue their relationship and finally separated after six years in 1998.

Later in 2000, Cottle began dating rapper T.I. And after dating for 10 years the couple decided to take their relationship to the next level and finally tied the knot on July 30, 2010, in Miami Beach, Florida. The duo welcomed their first son, King Harris on August 25, 2004, and second son Major Philant Harris on May 16, 2008. Similarly, on March 26, 2016, Cottle gave birth to their daughter Heiress Diana Harris.

But the things didn’t go well in between the couple. So, in December 2016, Cottle filed a divorce with her husband T.I. And in the same month, the couple divorced after six years of their marriage. Moreover, she previously dated boyfriend, Tupac Shakur. Well, she is currently single and there are no any rumors of her affairs.

Tameka Cottle is living a lavish life with her children. Cottle earns an astonishing amount of money from her singing and songwriting career. As of now, Cottle has an estimated net worth of $3 million.