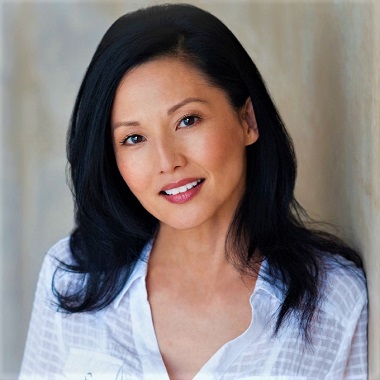 Tamlyn Tomita is one of the successful actress and singer, widely recognized for her role as Kumiko in The Karate Kid Part II and Janet Tokada in the film “The Day After Tomorrow.” Having active in the entertainment industry since 1986, People magazine named Tomita as one of the 50 Most Beautiful People.

Tamlyn was in a relationship with American actor, Greg Watanabe, but the couple never opened about their life publically. There are no stories of their togetherness, but they have worked in a movie ‘Only The Brave’ which was released in 2006.

Tamlyn Naomi Tomita was born on 27th January 1966, in Okinawa, Japan. She is the daughter of Shiro and Asako Tomita. Her father, the late Shiro Tomita, was doctored at Manzanar during World War II as a child and became a Sergeant with the Los Angeles Police Department who served to form the nation’s first Asian task force in 1977. He passed away in 1990 due to cancer.

Tomita attended the Granada Hills High School in Los Angeles and graduated from there. She majored in history at UCLA before leaving to show business.

Before making her appearances in the entertainment industry, Tomita participated at the Nisei Week Pageant in Los Angeles and won the title of Queen in 1984. After holding the title of Nisei Week Pageant’s Queen, she participated in Miss Nikkei International and held the title in 1985. In 1987, Tomita made her Japanese singing debut on the label Polydor and released a single and an album

Tomita began her acting career in 1984 when she was traveling as Queen of Nisei Week to Hawaii, and there she was selected as part of a casting call by director John G. Avildsen. She was then offered to play Kumiko in the martial arts drama film “The Karate Kid Part II”  in 1986.

After appearing several movies and TV series, she landed a role in the 1990 comedy film “Come See the Paradise,” playing Lily Yuriko Kawamura / McGann. In 1993, she appeared in the science-fiction television series “Babylon 5” playing Lt. Cmdr. Laurel Takashima. The series was created and written by J. Michael Straczynski.

She also co-starred in the Roland Emmer’s science fiction disaster film “The Day After Tomorrow,” playing Janet Tokada in 2004. In 2008, she made her return to daytime soaps with a recurring role on the ABC’s “General Hospital.”

Tomita is currently making her recurring appearance in the television series “Teen Wolf,” where she plays Noshiko Yukimura since 2014. Jeff Davis developed the series.

Tomita has won the hearts of million viewers through her charming and sweetness acting. However, when it comes to her own life, she stays away from media. She seems to focus on her career and therefore isn’t showing any hint of moving forward with the relationship in real life.

Previously, she was in a relationship with American actor, Greg Watanabe, but the couple never opened about their life publically. There are no stories of their togetherness, but they have worked in a movie ‘Only The Brave’ which was released in 2006.

With her then-ongoing chemistry with her boyfriend Watanabe, the actors authoritatively came out with their separated story in 2006.

Being in the film industry, she has used her fame a lot in maintaining balance in the stories of about Asian American. She is an activist in political and Asian American and Pacific Islander communities(AAPI). In 1991, she was selected by People magazine as one of the 50 Most Beautiful People in the world.

Tomita was granted in the Asian American International Film Festival Award in 2001. Allocating information from several sources as of 2018 it is found out that her current estimated net worth is around $3 million. The 5′ 4″ actress and singer hold dual nationality, American, Japanese and belong to Asian ethnicity of Filipino and Okinawan descent.