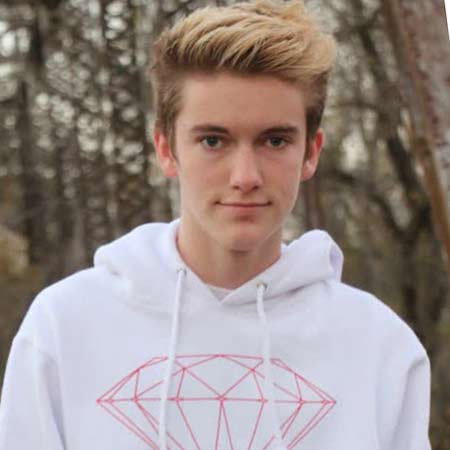 Tanner Braungardt is a famous video content creator on YouTube. He has his own channel which showcases his talent as a trampolinist and free runner. As of February 2019, his YouTube channel “Tanner Braungardt” has been subscribed by more than 4.3 million people.

As of 2019, Tanner Braungardt has an estimated net worth of $2 million. Further, his annual salary is reported to be around $150,000. Currently, he is possibly living a single life and is searching for the right partner.

Currently, he is living a lavish life along with his mother in Wichita. The youngest star, Tanner Braungardt has become successful to gain massive fame over the digital platform just at the age of 18. For the information, Daniel Middleton is the present richest YouTuber as per reports.

Well, this talented YouTuber Tanner has a pretty amazing collection of cars. In his videos, we can see how he spends his lifestyle. He often rides in a super fast luxury car.

Talking about his car collection, Braungardt owns an Audi r8, whose market price in the United States is around $160,000. Also, he recently bought a Lamborghini Huracan, which costs over $170,000.

The proficient reality star was in a relationship with, Paris Anderson, an Instagram star. The duo started dating each other on December 11, 2016, but kept it secret for some months.

Later in 2017, Tanner confirmed that the two are in a relationship. Paris also shared her first snap with Tanner on her Instagram account in 2017.

But after being together for a year, the couple parted their ways. The reason behind their separation is yet to be revealed. As per the reports, Tanner Braungardt is single and might be focusing on his professional career.

Tanner Braungardt was born on July 24, 2000, in Wichita, KS to Jamie Braungardt and Kim Braungardt. When he was just four years old, his parents got divorced. After the separation of his parents, he resides with his mother.

Braungardt studied in Augusta High School till his sophomore year and then took online classes for the last 2 academic years to get his high school diploma.

Tanner has a brother named Tristan and a sister named Taylor. His brother is also a YouTube star, and his sister is an Instagram star. He holds the American nationality and belongs to White American ethnicity.

From August 31, 2011, he began his YouTube channel by posting crazy antics with a trampoline for which the viewers immensely appreciated him. He made the art of free-running and trampoline jumping for the teenagers.

Tanner’s YouTube channel has more than 3.8 million subscribers and was featured among the Top 100 fastest growing YouTube channels in the world. He once featured a video of a bathtub full of Coca-Cola while his friends emptied packets of Mentos helped him to earn a record of 14 million views.

You may like: An American YouTuber as well as a Twitch gamer, Megan Leeds’ Bio and net worth!

In 2016, he earned 100,000 subscribers at his YouTube channel. Recently in 2017, the number of subscribers has increased and successfully reached over 3 million. Currently, he is uploading personal vlogs.

Tanner life is completely different in real life comparing to the one at his videos. He seems to very cool among all the teenagers.  As a teenager, he has to face his share id bullying at school. It was especially after he posted his first couple of videos. His friends at his school called it lame and mocked at him.

At the time Braungardt was too worried by the behaviors and response he got from his friends, but in the recent days he has grown up and has accepted the fact that people will always criticize you if you get success.