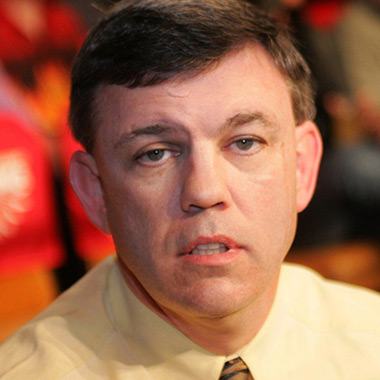 Teddy Atlas is an American boxing trainer and fights commentator.

Teddy Atlas was born on July 29, 1956. He spent his childhood in Staten Island. His birth name is Theodore A. Teddy Atlas, Jr. His father name is Dr. Theodore A. Atlas and his mother name is Marry Riley Atlas. His mother Marry was a former contestant in the Miss American pageant system. She was also a model. He most of the time spent summers in Spring Lake New Jersey.

During his teens, Teddy Atlas was arrested several times and also dropped out of school. He also served time on Rikers Island. Most of the time he was involved in a street fight in Stapleton, Staten Island. During the fight, his face was severely slashed with a flick knife. He needed 400 stitches to close the wound. He still has a distinctive scar in his face.

Teddy Atlas began his career as an amateur boxer with Cus D’Amato. He had many amateur fights and due to his back injury he left training. He then became assistant to D’Amato in the Catskill Boxing Club. He assisted in the training of D’Amato’s teenage protégé Mike Tyson. In 1981, he left the camp following an argument with the 15-year-old Tyson after Tyson  sexually treated  a 12-year old female relative of Teddy. Atlas threatened Tyson with a .38 caliber handgun pointing to Tyson’s ear. He told him never touch his family again. This discussion between a young Mike Tyson and Teddy led to Teddy’s discharge from the Catskill Boxing Club. After the incident, he was no longer welcomed in D’Amato’s home. He then became a head trainer to Michael Moorer. Teddy guided Michael to the world heavyweight title in 1994. Teddy drew criticism for his overly considerable speeches in the ring corner which includes Moorer’s Heavyweight title fight with Evander Holyfield.

Teddy Atlas worked as a trainer of Donny Lalonde. Lalonde was a top-ranked boxer. He then parted with Lalonde. Lalonde then hired Tommy Gallagher to train him. In his autobiography, Teddy claimed that he was very angry after he was fired by Lalonde. He also claimed that he went to Lalonde’s house with a gun intending to kill him. But Lalonde refused the story. Teddy began training Russian heavyweight Alexander Povetkin in 2009. Teddy prepared Povetkin for a title match against Wladimir Klitschko. On August 27, 2011, Povetkin won the regular WBA heavyweight championship after defeating Ruslan Chagaev. In 2015, he trained Timothy Bradley and prepared him for his welterweight title defense against Brandon Rios. On November 7, 2015, Bradley knocked out Rios in the ninth round.

Teddy Atlas is happily married to Elaine. The couple together is blessed with two children named Teddy III and Nicole. In 1997, he founded the Dr. Theodore Atlas Foundation to honor his father. In 2006, he published his autobiography. In his autobiography, he compared his position as a trainer to a role as a father.

As of 2016, Teddy Atlas has a net worth of an estimated $2 million dollars.