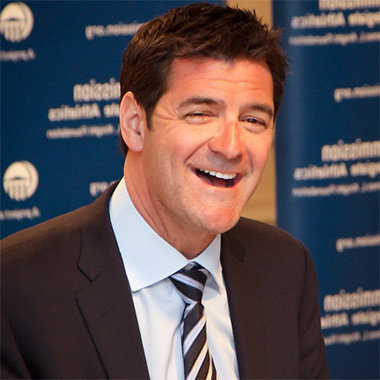 Tom Farrey is popular when it comes to the television reporter and presenter. Tom Farrey has been the Sports and Society program for several years. Under Sports and Society program, he has been contributing in its mission to assist dialogue, inspire solutions that serve the public interest and summon leaders. He has gained name and fame as an enterprise reporter and has been recognized as the nation’s best on television, in print and online. He has also made his identity as an author and his books have been considered as a leading work on modern youth sports.

Moving to his early life, Tom Farrey was born and raised in Hollywood, Fla..Besides this, there is not much information on his childhood memories. He completed his high school education from one of the well-known schools of Florida. After completing his school education he joined the University of Florida to continue his further study. He graduated from the University of Florida. His parent background has not been disclosed yet.

Farrey worked in The Seattle Times for the eight years. After completing his University education he started to work in The Seattle Times and covered the NBA and NFL as a reporter. Later on, he was assigned general work. In 1992, he investigated the University of Washington football program and revealed that the loan taken by the quarterback is against the rules of NCAA. After his investigation, the Huskies received a ban from the NCCA and for this investigation, he was awarded best investigating reporting award from the Associated Press Sports Editors.

Tom Farrey started his career in ESPN in 1996 when he started to work in the position of deputy editor of the website. During his tenure, he began incorporated television-online investigative packages for Outside the Lines and connected the world sports to the broader society. His work has been considered as a framework for the change from grassroots sports to college sports. He has authored a book titled “Game On: The All-American Race to Make Champions of Our Children (ESPN Books). His book and paperback have been included in Universities’ curriculum on many campuses such as University of Florida and Oregon State University. Farrey has explored the Aspen Institute’s Sports & Society Program through his book.

Throughout his career, Tom Farrey has won numerous awards for his contributions in connecting sports with broader society. During his tenure, he has traveled to many countries while reporting. He has been to Europe, Africa, Latin America and Australia. He has been also known for his investigation of baseball players with a hidden camera which he did in 1999. Similarly also covered the story of torture of Iraqi athletes by the son of Saddam Hussein, Uday. His report on sexual harassment against longtime AAU president Bobby Dodd brought fire on the largest organization in youth sports.

Digging his personal life, Tom Farrey has not disclosed any information about his married life, relationship, and children. He has hidden his personal life from media very nicely. To know more about this young and prominent journalist, he can be followed in his facebook and twitter account.