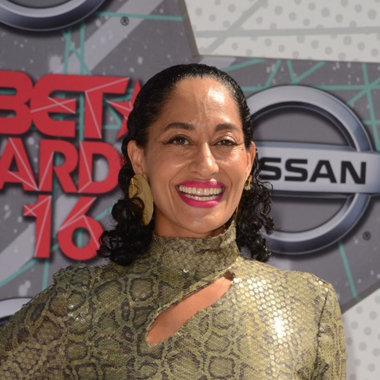 Tracee Ellis Ross is an American model, actress, producer, comedian, and television host. She is mainly known for her lead role on the comedy series Girlfriends as Joan Clayton. In 2007, she starred in the drama film Daddy’s Little Girls.

Tracee was born in Los Angeles, California to Diana Ross and Robert Ellis Silberstein. Her mother Diana is an actress and singer while her father Robert is a music business manager. Her birth name is Tracee Joy Silberstein. Her half-brother’s name is Evan Ross.

She studied at the Dalton School located in Manhattan. She then attended the Institut Le Rosey in Switzerland. During her teen days, she was a model. In 1994, she graduated from Brown University with a theater degree. Later she worked as a model in the fashion industry. She also contributed to New York and Mirabella magazine.

In 1996, she made her big-screen debut. She played the role of a Jewish/African S American woman in the film Far Harbor. In 1996, she was featured in the video of Macarena. She started hosting a Lifetime TV magazine series, The Dish in the year 1997.

The following year she starred as a former high school track star in the NBC TV movie Race Against Fear: A Moment of Truth. Her next role was in the film, Sue. In 2000, she got her first major studio role in Hanging Up. It was directed by Diane Keaton. The same year she appeared in the MTV series The Lyricist Lounge Show. She then got the lead role in the UPN/CW series Girlfriends. For her performance, she was awarded an NAACP Image Award as Outstanding Actress in Comedy Series. In 2009, she won a second Image Award for the role.

In 2007, Tracee starred in the HBO movie Life Support with her brother Evan Ross. She also appeared in the Theatrical movie, Daddy’s Little Girls. In 2009, she appeared in the film Labor Pains. She had a role as a pregnant doctor in an episode of Private Practice in 2010.

The following year, she had a role as the estranged wife in four episodes of CSI. Ross then starred with Malcolm-Jamal Warner in Reed Between the Lines. In 2012, she won her third NAACP Image Award for Outstanding Actress in a Comedy Series. She then appeared in the Alicia Keys’s film Five in 2011. Her performance in the film earned her an NAACP Image Award and Black Reel Awards nomination. In 2012, she starred in the drama Bad Girls. Ross was cast in the comedy series Black-ish in 2014. For her performance, she won another NAACP Image Award. She was honored by Brown University in 2015.

She has a huge number of fans following her on her official Instagram, Facebook, Twitter. She is very responsive to her fans. She is loved by her fans. Her other information can be found on her Wikipedia and other official sites related to her.