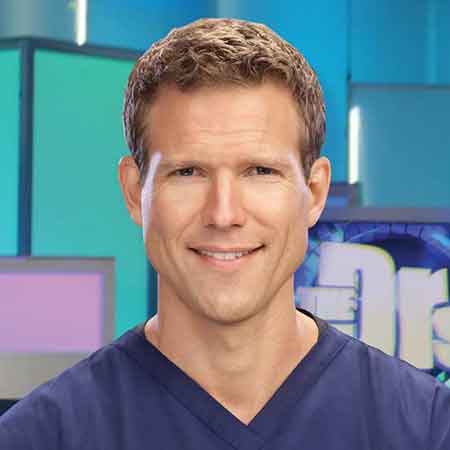 Travis Stork is an American emergency physician as well as a television personality. He is widely known for appearing in an American dating and relationship reality television series, The Bachelor. Moreover, he also hosted the syndicated daytime talk show The Doctors for which he was nominated for Daytime Emmy Award.

Travis Stork was born on 9th March 1972, in Fort Collins, Colorado, the United States as Travis Lane Stork. He belongs to an American nationality and holds white ethnicity. Stork is the only son of Donna Stork and Roger Stork. His parents were the Midwestern farmers.

After his graduation, Travis Stork began an emergency medicine residency at Vanderbilt University Medical Center in Nashville, Tennessee. Later, Stork appeared in an American dating and relationship reality television series The Bachelor in 2002. Similarly, Stork further appeared in the series Three Rivers in 2009.

For his contribution in the show, Stork was nominated for Daytime Emmy Award in 2012. Stock further worked as chairman of MDLIVE from October 2013 to March 2015. Besides this, Stork has released some books including The Lean Belly Prescription and The Doctor’s Diet.

The 46 years old doc, as well as a television personality Travis Stork, was previously married to a pediatrician Dr. Charlotte Brown. The couple began dating in 2009 and after dating for two years they got engaged in 2011. Likewise, the duo shared their vows on 30th June 2012 in Colorado, United States.

But, the couple failed to continue their relationship and finally divorced on 25th March 2015. However, they haven’t mentioned the exact reason for their divorce. Although the couple was married, they didn’t have any kids.

Besides this, Stork further dated a school teacher, Sarah Stone in 2006 who lived in Nashville, Tennessee. Moreover, in 2008, Stork was romantically linked with a singer and songwriter, Carrie Underwood.

Being such a renowned personality, Travis Stork earns a good sum of money from his multiple profession. He has maintained a lavish and standard life. Allocating information from several sources as of 2018 it is found out that Stork current net worth is estimated around $8 million.

Moreover, Stork owns a dog named Nala of terrier breed which worth $700 – $1000. He often hangs out along with his friends during vacations.