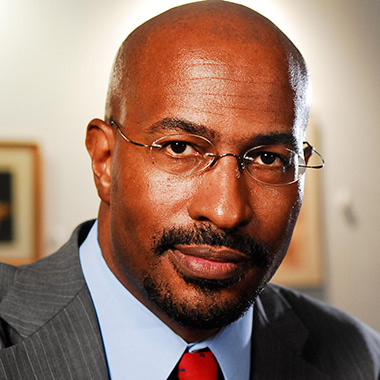 Van Jones was born on September 29 1968 in Jackson, Tennessee, U.S. His full name is Anthony Kapel Van Jones but mostly is known as Van Jones. He is an American civil rights activist, attorney and environmental advocate. He is also the co-founder and president of four non-profit organizations which also includes Rebuild the Dream. In 2005, for African Americans he co-founded Color of Change which is an advocacy group. In 1968 he was born with his twin sister in Jackson, Tennessee. He was born to his teacher at high school mother and his father who was a principal at junior high school.

When he was child he was the stereotypical geek who lived up in his head a lot. He calls himself as bookish and bizarre. His grandfather used to be the senior bishop in Christian Methodist Episcopal Church. He helped his grandfather to religious conferences. When he was young he was a fan of John and Bobby Kennedy. Van attended Jackson Central-Merry High School and in 1986 he graduated from there. He also studied at University of Tennessee at Martin and graduated from there holding B.S. in communication and political science.

As an intern he worked at the Shreveport Times, the Associated Press and Jackson Sun. He also contributed to launch campus based publishing efforts. The publications included the Periscope, the Third Eye, the New Alliance Project, etc. He then studied at Yale Law School. He earned his Juris Doctor in 1993. Later he moved to San Francisco. In 1992, he protest for the Rodney King verdict as a volunteer legal monitor. During the protest he with his other participants were arrested but later he came out as district attorney later dropped the charges. He with other participants won a small legal settlement. In October 2005 he called himself as a rowdy nationalist.

After graduating from law school he went to Washington, D.C. to take a job but later he moved to San Francisco. He is also the member of Standing Together to Organize a Revolutionary Movement which protested against police brutality. He then started Bay Area PoliceWatch in 1995 as project of the Lawyers’ Committee for Civil Rights. This was the region’s only bar-certified hotline and lawyer service for victims of police abuse. After starting the service he got 15 calls a day.

As a Non-Profit worker

He then founded a new umbrella NGO in 1996 called as Ella Baker Center for Human Rights. The campaign fired Officer Marc Andaya from San Francisco Police Department. He with Ella Baker Center launched the books in 2001. In 2005 following Hurricane Katrina, along with James Rucker he co-founded a Web based grassroots organization addressing Black issues called as Color of Change. He then started promoting eco-capitalism and environmental justice by 2005. For United Nation’s World Environment Day celebration he along with Ella Baker Center produced Social Equity Track which held in San Francisco.

It was the beginning of Ella Baker Center’s Green-Collar Jobs Campaign. Later Oakland Green Jobs Corps launched by the City of Oakland on October 20 2008. He planned to launch Green for All when he attended Clinton Global Initiative in September 2007. On January 1 2008 it formally started working when it organized The Dream Reborn. He also have served numbers of environmental and nonprofit organizations such as the National Apollo Alliance, Rainforest Action Network, 1Sky, Social Venture Network, Free Press and Bioneers. He also served the Institute of Noetic Sciences and also Center for American Progress.

Van first book was released by HarperOne on October 7 2008 titled as The Green Collar Economy. He got his reviews form Nancy Pelosi, Laurie David, Al Gore, Ben Jealous, Paul Hawken and Winona LaDuke. His book was ranked no. 12 as one of the bestselling book by The New York Times.

Achievements and Other Works

He served at the White House Council on Environmental Quality as Special Advisor for Green Jobs and Innovation. He did not intend to work for the White House but later ended working as an ardent supporter of President Barack Obama. Van served at the Center for American Progress in February 2010. He also received appointments at Princeton University at the same time. He also served Green For All as a senior policy advisor. He was awarded with NAACP President’s Award on February 26 2010 at the 41st annual NAACP Image Awards.

He also spoke at the One Nation Working Together rally on October 2 2010 in Washington, D.C. He there spoke about the fight against poverty with the fight against pollution. He also spoke at Powershift 2011 on April 15 2011 in Washington, D.C. He there addressed over 10000 students on issues of climate justice. In the U.S. history, Powershift 2011 became the largest organizing training and youth activism. He also worked with MoveOn.org in 2011 launching the Rebuild the Dream campaign. In February 2012 he spoke on behalf of underwater home owners at a speech in San Francisco. His official Twitter account name is @VanJones68.