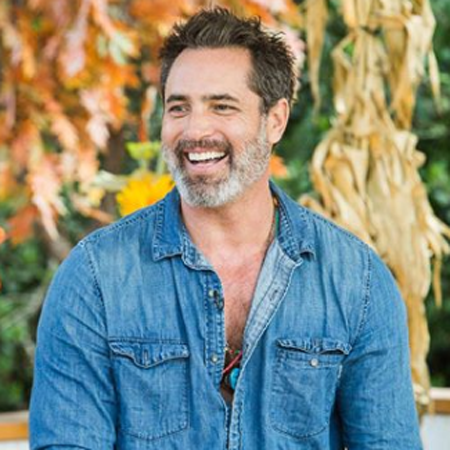 Victor Webster is a renowned Canadian actor. He is famous as the second actor to play Nicholas Alamain on the NBC daytime soap, Days of Our Lives. Similarly, he is known for playing the role of the mutant Brennan Mulwray in the science fiction TV series, Mutant X.

Being a successful actor, Victor Webster has appeared several films and TV series. Webster earns a decent amount of salary from his acting work. Additionally, he also adds his net worth from endorsements deals. As of 2017, his net worth is estimated to be around $3 Million. Victor is still active in this field, thus no doubt his net worth will increase in coming days.

Currently, Victor Webster’s relationship status is single. But in the past, he was in a relationship with actress Krista Allen in 1999. After dating around years, the couple ended their relationship in 2000. He then began to date Katrina Darrell in 2009.

With his ex-girlfriend, Katrina Darrell: justjared.com

Victor Webster was also rumored to be dating British celebrity, Leilani Dowding, Katie Clearly (2005) and Monica Hansen. Currently, there is no any information about him regarding his affair, and it seems like he is focusing his career rather than a girlfriend.

Victor H. Webster was born on 7th, February 1973 in Calgary, Alberta, Canad. He is the son of hairstylist Roswitha, and a police officer, John Webster. Victor Webster moved to San Clemente, CA with his family in 1986.

As a teenager, his misbehave lead him to the problem. Later, Victor Webster found his own path and joined Martial arts. Afterwards, he became a teacher and improved the skill more and got the black belt in Taek won do.

During his childhood with his father and sibling: Instagram

Talking about his education, Victor Webster graduated from Saddleback junior college. During his college days, he used to engage in plays and theater classes.

Before starting his career in acting, Victor Webster worked as a stockbroker in import/export business. In the late 1990s, he became a model and appeared in Cosmopolitan Magazine’s All About Men 1998 special issue.

Victor Webster made his acting debut in 1997, playing the role of Roge in the TV series Sunset Beach. In 1999, he landed the role of Nicholas Alamain on the NBC daytime soap Days of Our Lives.

On the set of Days of Our Lives with his co-stars: Pinterest

From 2001 to 2004, Victor Webster appeared in the TV series Mutant X, where he played the role of Brennan Mulwray. He starred there for over sixty episodes until the show was canceled.

Due to his incredible skills, Webster listed him as one of People Magazine’s 50 Most Eligible Bachelors in 2002. Moreover, he has appeared in episodes of many TV series. Some of them are listed below.

Victor Webster also starred detective Carlos Fonnegra on the series Continuum from 2012 to 2015. Additionally, he had a small role in the film Why Did I Get Married Too. Webster also starred in the movies Most Love Dogs and The Scorpion King 3: Battle for Redemption (2013).

On the set of Continuum: Collider

In 2013, Victor Webster played the lead male vampire Stefan in the film Embrace of the Vampire. In 2016, he played the role of the chef in the Hallmark original movie, Summer Villa.

Most recently, Victor Webster has appeared in the films such as Love Blossoms, A Harvest Wedding, and Home for Christmas Day. To know more about him, you can catch him on social networking sites.