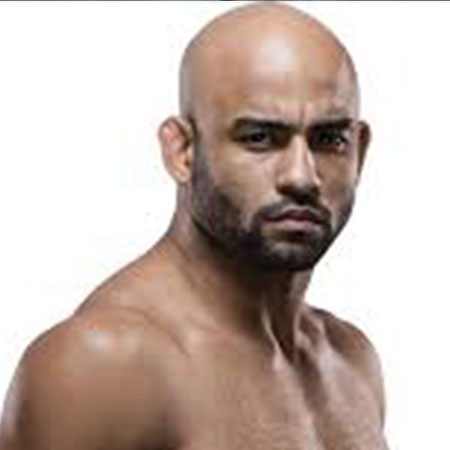 Alves is already married.  Alves is the winner of The Ultimate Fighter: Brazil 3 Middleweight tournament. He has made a name for himself fighting in Jungle Fight. His total mixed martial arts record includes 12 win, 3 loss, and 0 draws.

Warlley Alves was born on 4th January 1991, in Governador Valadares, Minas Gerais, Brazil. His full name is Warlley Alves Andrade. He was raised by his mother Sirlane Alves. Alves belongs to a Brazilian nationality. But yet, he hasn’t revealed his education background.

Warley Alves began his MMA career at the age of 10. In 2011, he began his professional MMA career. On 31st May 2014, Alves won The Ultimate Fighter: Brazil 3 Middleweight tournament by defeating Márcio Alexandre Jr. He next competed at UFC Fight Night 56 and won the fight against Alan Jouban.

Similarly, Alves won two regular fights over Nordine Taleb and Colby Covington at UFC 190 and UFC 194 respectively. However, Alves lost the fight against Bryan Barberena at UFC 198. On 12th May 2018, Alves got victory over Sultan Aliev at UFC 224. His recent fight was at UFC Fight Night 135 against James Krause which he lost via knockout.

Warlley Alves is much more secretive about his personal life. However, Alves is a married man. Alves tied the knot with his wife on 1st October 2017. Although Alves is already married, he hasn’t revealed any information about his spouse.

Alves frequently shares photos of a child on his Instagram. But he hasn’t mentioned who the child is. Well, she might be his daughter. Besides this, there are no any rumors of his divorce and extramarital affairs. Moreover, there are no any records of his past relationships.

Warlley Alves, aged 27, stands the perfect height of 1.8 m which is 5 feet 11 inches tall and weighs 77 kg. Likewise, he has maintained a good physique.

Currently, the estimated net worth of Warlley Alves is around $2 million. Similarly, his UFC career earning as of 2018 is  $233,200. Alves earns a good sum of money from his MMA career. So far, Alves has competed in numbers of championships and has won several of them.

During UFC 190, Alves received a total of $32,500. Similarly, at UFC 198, he received the paycheque of $28,500. Starting his MMA career in 2011. Alves still active in the same field. Looking at his hard work and dedication, Alves’ net worth his sure to be increased in the coming days.