Skip to content
Home » Gossip » What really is Google Fiber? Why will everyone want it?

What really is Google Fiber? Why will everyone want it? 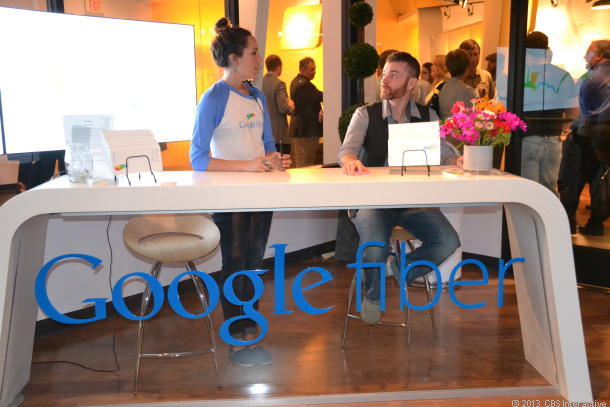 All over the world, there are many people who may not know about Google Fiber and many people who know less and want to know more about it, but only handful of cities in the United States are providing its people with Google Fiber. First let’s talk about what is Google Fiber and why is it so cool? As its name suggests, Google Fiber is basically a fiber optic based network infrastructure brought up by Google, a world leader in search engine now turned into TV and Internet service provider. Google Fiber started in March, 2011 bringing its three service plans in July, 2012 and later connecting first homes in September of 2012.

As stated earlier, Google Fiber now has three type of services that is “Gigabit+Tv” service targeted to home users for just $70/month, “Gigabit” service targeted to business users for just $70/month and also free internet service for $0/month for seven years which includes only $300 construction fee once. Customers connecting to Gigabit services do not have to pay construction fee. Therefore, we can say it’s not just TV and it’s not just internet but it’s mighty “Google Fiber”. With “Gigabit” only service you would get network box with 1 GB/sec internet speed with 1 TB Free Google Drive space. With “Gigabit+Tv” you would get free new Android Tablet called Nexus 7 which can also be used as a remote and all of yours favorite channel in one place with TV box with huge storage for saving whatever you would like to watch with storage box and all the features of “Gigabit” only service. The third plan, free internet service if taken provides up to 5MBPS download and 1 MBPS upload. Obviously, Google Fiber is pretty much cool than other internet service provider because it provides high speed internet with speed up to 1GB/second which is around 100 times the speed than other internet service providers found in most part of the United States. Almost all the experts involved in the field of internet technology would agree that it would be very hard for other companies to compete with Google Fiber in the United States. An average customer in the US pays around more than $50/month for cable based companies that may give around 30 Mbps down and 5 Mbps up. But with Google fiber one may get gigabit internet service for just $70/month. Moreover, people would prefer Google Fiber over another type of internet service provider like DSL as DSL provider may charge as much as a cable company and may provide even worse internet. Just imagine, now with 1 GB/sec internet, there will be no more waiting for buffering videos, cloud computing and cloud gaming that doesn’t slow down, HD video conferencing over long distance and many more at a price you will not find too costly. Average upload speed today’s is just about 1.2 MB/sec and average download speed is about 5.8 MB/sec and what Google Fiber provides is about 1 GB/sec on both upload and download. After, Google announced its latest plans to install Google Fiber in nine locations (Portland, San Jose, Salt Lake City, Phoenix, San Antonio, Nashville, Charlotte, Atlanta, Raleigh-Durham) all over United States in 2013-2014 with actively running its operation in three lucky cities Austin, Kansas city and Provo, people have been raising a interesting question,

“Will Google Fiber soon take over the world?”

Although Google Fiber is 20 times faster than the fastest American alternative internet provider like Verizon and just cost about 0.07$/MB, not many people would be able to use it for years. A survey by a broadband-based company shows, it will take Google 107.7 years to provide service globally at a similar rate, and will cost Google about 1.6 Trillion dollars for providing service worldwide and even if 100% of its CAPEX is used to install Google Fiber per year, it would take 465 years to take over the world. It is practically impossible for Google to provide service all over the globe very soon due to the need for costly infrastructure to run a Google fiber project.

Therefore, Google Fiber may not take over the world but it is sure that it will earn a huge amount of profits and will try to provide its services to as much as people as it can. A lot of people are arguing that there is no need to give this much speed to people and even more, people are supporting Google Fiber and saying it would change everything. It is sure that with Google Fiber coming, traditional based ISP providers will be forced to improve their services and many other companies will invest in fiber optics-based internet. Not only that, a large number of funds may be invested by other companies in this area which will in return improve the internet and television simulation that we are getting now. Therefore, general people are surely going to profit from Google Fiber in whatever way. https://fiber.google.com/