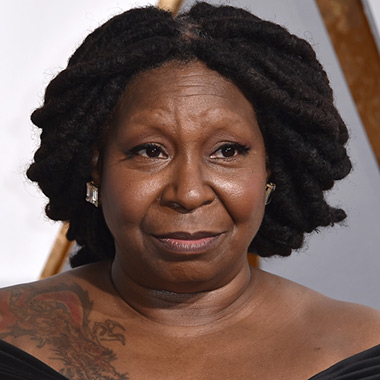 Whoopi Goldberg an American actress, comedian, activist, and author is best known for her roles in both comedic and dramatic films, as well as her groundbreaking work in the Hollywood industry as an African-American woman. She had worked on numerous films and television shows.

Renowned actress, TV host, comedian and human rights promoter, Whoopi was born as Caryn Elaine Johnson on 13 November 1955, in New York City, New York, the United Staes. Goldberg and her elder brother, Clyde, were raised in Chelsea-Elliot House projects by their single mother, Emma Johnson, a nurse, and an educator in Manhattan.

Goldberg’s father, Robert James Johnson who is a clergyman abandoned the family to make ends meet. She changed her name to Whoopi Goldberg as she thinks that her birth name was too boring and described her as half Jewish and half Catholic.

Goldberg battled with dyslexia as a teen and ultimately led her to drop out of Washington Irving high school at 17. She then worked from home as phone sex operator to manage her living. Whoopi Goldberg holds an honorary degree from Wilson College in Chambersburg, Pennsylvania, and a Ph.D. in literature from New York University.

In 1974, Whoopi Goldberg moved to California, prior to this she had lived in various places including Los Angeles, San Diego, and San Francisco. During this time, she worked as a mortuary beautician as well as carving a career in show business. During her stay in San Francisco, Goldberg won a Bay Area Theatre Award for her portrayal of comedienne Moms Mabley in a one-woman show. Soon after earning this honor, she moved to New York. In 1983, she starred in a popular ‘The Spook Show’, a one-woman Off-Broadway production which featured her original comedy material that focuses on the issues of racism in America.

By 1984, director Mike Nichols had moved The Spook Show to a Broadway stage, and in 1985, Goldberg won a Grammy Award for Best Comedy Album for the recording of skits taken from the show. Since then, she began appearing in various stages shows and receive significant recognition from Hollywood industry.

In 1985, Golberg was cast as the lead female role in the production of Director Steven Spielberg’s ‘The Color Purple’, based on the novel by Alice Walker on the same name. Her role in the film was critically acclaimed that earned an Oscar nomination and her first Golden Globe Award, for best actress.

In 1990, Goldberg played as a spiritual advisor Oda Mae Brown in ‘Ghost’, starring Patrick Swayze and Demi Moore. The film made a blockbuster success that earned her the 1991 Academy Award for Best Supporting Actress, that led her the second African-American woman to win an Oscar award. The role also garnered Goldberg her second Golden Globe, as well as the Black Entertainer of the Year Award from the NAACP and the Excellence Award at the Women in Film Festival.

In 1991, Whoopi Goldberg made an appearance in the comedy ‘Soapdish’, featuring Kevin Kline, Elisabeth Shue, and Sally Field. She was then cast as Detective Susan Avery in Robert Altman’s parody ‘The Player’ starring Tim Robbins in 1992. The same year, she starred as a world-weary lounge singer disguised as a nun in Emile Ardolino’s direction ‘Sister Act’. The film earned her an American Comedy Award for Funniest Actress in a Motion Picture, as well as Golden Globe nomination for Best Actress in a Comedy. Sister Act enormous success led to the creation of ‘Sister Act 2: Back in the Habit’ in 1993, which featured Maggie Smith, James Coburn and R&B artist Lauryn Hill.

In 1992, Whoopi Goldberg launched her own television talk show, The Whoopi Goldberg Show, where she interviewed prominent Hollywood celebrities and politicians. The show was axed in 1993 after running 200 episodes, due to low ratings. That year, Goldberg also appeared in the feature film ‘Made in America’, which co-starred her then-boyfriend Ted Danson.

Goldberg hosted the Academy Awards, making her the first woman to do so in 1994, 1996 and 1999. In early 1986, she also co-hosted ‘Comic Relief’, a live showcase that raised money for the homeless.

In 1998, Goldberg appeared on the celebrity game show ‘Hollywood Squares’, for which she received two daytime Emmy Awards. Her film credits during that time include ‘The Deep End of the Ocean’, ‘Girl’, ‘Interrupted’. In 2004, Goldberg returned to Broadway to star in a self-titled one-woman show, and in 2006 she debuted a syndicated radio show, ‘Wake Up With Whoopi’.

On 4th September 2007, Whoopi Goldberg was named the moderator of the daytime talk show ‘The View’. On her first day, she defended footballer Michael Vick in his dogfighting case, stating that the spectacle isn’t unusual for a Southern native like Vick. “It’s like cockfighting in Puerto Rico,” she added. “There are certain things that are indicative to certain parts of the country.”

During her time on ‘The View’, Goldberg has done several creative segments such as directing the 2013 documentary ‘Whoopi Goldberg Presents Moms Mabley’, which highlight the life and career of one of the first successful African-American women in stand-up comedy. She has also appeared on several episodes of the TV musical ‘Glee’ and ‘Big Stone Gap’ (2015).

In March 2016, Whoopi Goldberg, who smoked marijuana since her teen, collaborate with Om Edibles founder Maya Elisabeth and launched a medical marijuana brand to help women with menstrual issues, naming it “Whoopi and Maya.” Whoopi’s desire to stake her claim in marijuana industry was due to her long-term experience with painful menstrual cramps. She admits that marijuana was the only way she could find relief. The products offered include a topical rub, sipping chocolate, bath soak and tincture; initially available only in California.

In 1973,Whoopi Goldberg married her former drug counselor, Alvin Martin in 1973, with she shared one daughter, Alexandrea Martin, and divorced in 1979. In 1968, she was married to cameraman David Claessen and divorced in 1988. Goldberg married an actor, Lyle Trachtenberg to be her third husband in 1994 and separated in 1995. She then dated a famous actor, Frank Langella for several years. She was also romantically involved with other celebrities including Timothy Dalton and Ted Danson.

Apart from her overwhelming performances in the movies, she has also grabbed lots of public attention for not having her eyebrows. In her one interview in 2007, Goldberg accepted of shaving her eyebrows for attaining a certain identity. She was also caught into public attention while she alleged reported Bill Cosby of drugging her and attacking her in 2014. In according to her DNA test in 2006, Goldberg’s admixture test indicates that she is 92% sub-Saharan African and 8% European origin.

Whoopi Goldberg, with her trademark dreadlocks, piercing humor, wide impish grin, and successful career has earned her a net worth of $45 million dollars.