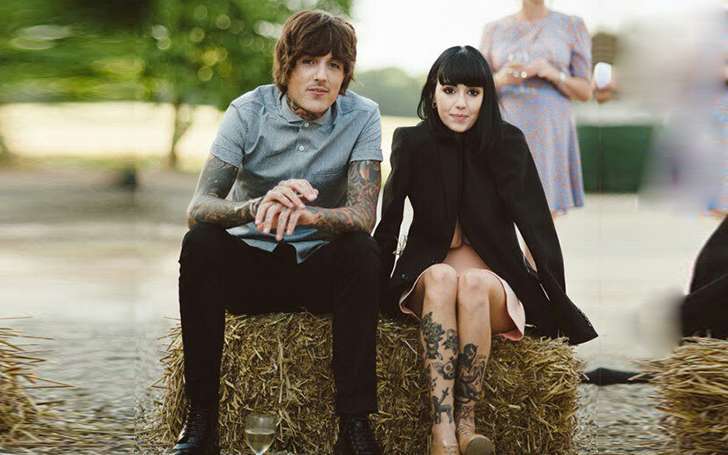 When you fully trust someone without any doubt, you will get two results: A person for life or A lesson for life. Similarly, in the case of Oliver Skyes and Hannah Pixie, they did find their trust as a huge lesson.

Bring Me The Horizon band’s lead singer Oliver Skyes is a musician, whereas Snowdon is a tattoo artist. They got married in 2015 and got divorced afterward after developing trust issues they faced in their relationship.

Let’s find out what was the problem that the former husband and wife faced and also know about their married relationship. So without any delay, let’s began!

Hannah Pixie Snowdon and her former spouse Oliver Skyes got engaged on the day of Christmas in 2013. After two years of their engagement, they decided to get married hence they tied the knot in 2015 in Tuscany and they formally became husband and wife.

Until 2016, the couple was living a happily married life but a piece of news broke out which was went to be the main reason behind their separation. Do you want to know what the news was?

What is your opinion? Do you think that Hannah really cheated her husband?

Well, the truth is totally different so don’t judge her on the basis of the post above. Alike you, we too were also shocked by Hannah’s post but the truth is Hannah’s Instagram account was hacked.

However, the post played a huge role to end their relationship.  In reply to Hannah’s post her former husband Oliver unknown of the truth, tweeted: 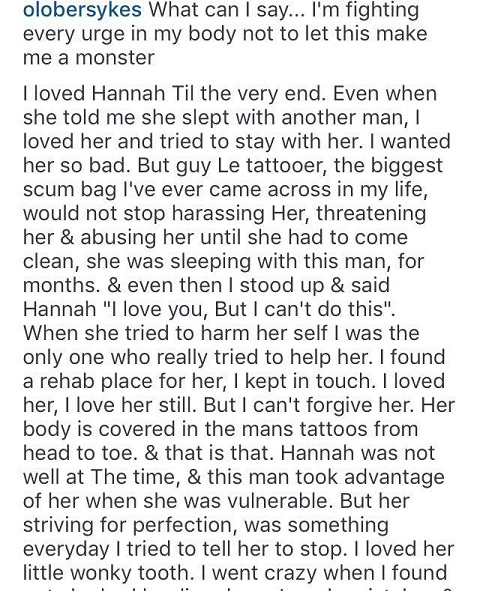 The hacker of Hannah’s Instagram account is still unknown but do you know that the couple became a success to overcome the problem and the matter was solved but the trust issues kept growing was still something which became the reason for the separation of Hannah with her husband Oliver. Wanna know the next reason? Then let’s began.

Hannah Charged Her Spouse Oliver Sykes for being Abusive, and Divorce

Hannah Hannah Pixie Snowdon really was so happy when she got married to her lover, Oliver. She also admits her wedding night as the most insane night of her life.

After the Instagram matter was solved, they were living a happy married life but their happiness could not last for long.

Hannah Claimed that Oliver slapped her and cheated her. She also informed the media that Oliver was cheating on her with the strippers. Let’s watch this video where Hannah Snowdon explains why she cheated on Oliver Sykes from BHTM.

“I did cheat on my husband and I did end up in a hospital as a result of that. As a result of not being able to handle what I’d done … We had a really bad marriage. He was unfaithful to me throughout entire relationship with strippers and after the first act of unfaithfulness I found out about, I just lost my mind … But luckily enough I’m here now and I’m fine.”

Current relationship with Hannah Pixie and Oliver Sykes and Daughter

Hannah and her former husband Oliver are now separated forever. At present, both are enjoying their respective life.

Her ex-husband Oliver is in a relationship with his girlfriend turned wife Alissa Salls. Oliver married his current wife Alissa on 22nd July 2017. Some of the sources have mentioned that Oliver further has a daughter named Stephanie Marie Sykes from his past relationship.

But the information about the mother of his daughter is yet to be revealed to the media. Moreover, talking about his previous relationship, he dated altogether 14 girls.

Whereas talking about Hannah she is not dating anyone at the current moment. However, Hannah previously dated her boyfriend Guy Le Tatooer. She even shared a photo of her former boyfriend on her Instagram account.

Hannah Pixie Snowdon and Oliver Sykes Career, Website, and her Net worth

Regarding their career, Hannah Pixie Snowdon is a professional Tattoo artist. Snowdon even owns a website named “fromhannahpixiewithlove” where she shared different sketches of tattoos as well as other items like Bags and Cups.

As of 2018, the estimated net worth of Snowdon is $2 million. Whereas Oliver is a professional singer as well as a musician. Oliver is the Bring Me The Horizon band’s lead singer. Oliver currently has a net worth of $2 million.