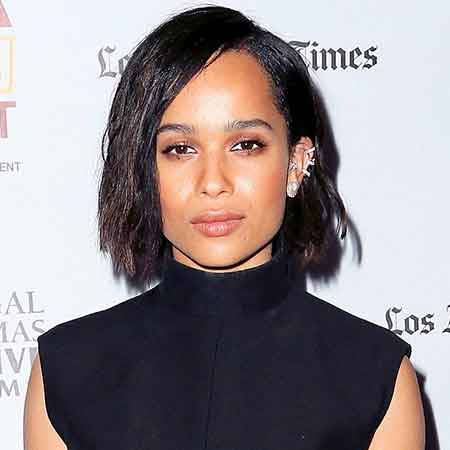 Zoë Kravitz is an American actress, singer, as well as a model. Kravitz is not married yet, however, she is currently dating her boyfriend Karl Glusman.

Kravitz further dated several other guys in past including Chris Pine, Noah Gabriel Becker, James Levy, and others. Kravitz is better known for her role in the movies including X-Men: First Class, Divergent Series etc.

Zoë Kravitz was born on 1st December 1988, in  Venice, Los Angeles, California, United States. Her father Lenny Kravitz is a musician and mother Lisa Bonet an actress. At the age of five, her parents divorced and she lived with her mother at Topanga Canyon.

At the age of eleven, Kravitz moved to Miami and lived along with her father. She has two half-siblings from her mother’s remarriage to actor Jason Momoa. She belongs to an American nationality and holds African-American ethnicity.

Most recently in 2018, Kravitz starred in the movies including Kin and Fantastic Beasts: The Crimes of Grindelwald. Similarly, her television roles are in Californication, Big Little Lies etc.

Zoë Kravitz is currently dating her boyfriend Karl Glusman. The pair began dating in 2016 and are still together. They often make public appearances and further attends events together. Kravitz frequently shares adorable photos of her boyfriend on her Instagram.

As the couple is dating, neither Kravitz nor Karl has mentioned any plans of getting engaged or married. Similarly, Kravitz was in a relationship with Chris Pine from 2014 – 2015. Likewise, she dated Noah Gabriel Becker in 2014.

Kravitz dated James Levy in 2012 and Ezra Miller in 2010. She was also in a relationship with Penn Badgley, Ben Foster, and others. Kravitz was even rumored to have an affair with Andrew VanWyngarden and Drake. Including all, Kravitz has been in a total of 11 relationships.

As of 2018, Zoë Kravitz has an estimated net worth of $8 million. Kravitz earns a decent amount of money from her multiple profession. So far, Kravitz has starred in numbers of movies and television series.

Moreover, she has also released several songs and albums. For long she has been working in the same field and analyzing her hard work, Kravitz’s net worth will surely increase in the coming days.