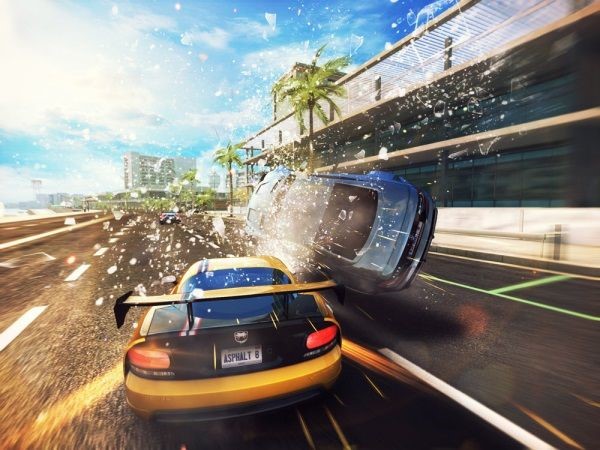 It would be so boring if alone but some our best mobile games helps to make our time fun, here are some list of some popular mobile games in this post :

Candy Crush Saga takes a sweet-toothed angle to the usual gem theme of match games, challenging players to match 3 or more different colored candies to reach as high a score as possible with limited moves. The basic move of this game is horizontally or vertically swapping the positions of two adjacent candies, to create sets of three (or more) candies of the same color. It is enjoyed by players of all ages.

This game is distinguished by some characteristics, which make it not only original but also extremely interesting. Into The Dead combines infinite runner and shooter gameplay to interesting effect. It throws you into the gruesome world of the zombie apocalypse where there are no second chances. Sprint through fields and woods, past fences, trees, cornfields, and the never-ending shambling hordes of the hungry undead.

4. Vector Vector is an exciting, arcade-style game featuring you as the exceptional free runner who won’t be held down by the system. Vector features silky smooth animations with numerous acrobatic moves as you run, jump, and slide past obstacles as you evade the police hunting you down. Urban environments provide for numerous movement challenges, with players being graded for style and speed at the end of each course.

5. Dead Trigger 2 Enter in a world where humanity is engaged in the ultimate battle for survival in the face of a global Zombie apocalypse. Blast your way through grotesquely detailed undead hordes as you engage in various missions for the human resistance. Besides a single-player story campaign, players take part in a massive world-wide cooperative effort, with their victories counting towards community goals. Numerous game modes provide varied challenges.

6. Asphalt 8: Airborne It goes the freemium route, delivering stunning graphics and fast-paced arcade racing. Airborne lives up to its name, with numerous ramps and other gameplay elements, encouraging players to take death-defying leaps in order to execute insane aerial stunts. Asphalt 8 features 47 high-performance vehicles from a who’s who of autos, 8 seasons, 180 events, and numerous game modes for single player or multiplayer.

7. FIFA 14 It is the most authentic football game for Android smartphones and tablets. This game has superior graphics and is packed with tons of real football leagues, teams, and players. You can Feel the excitement of every pass, shot, and tackle with new touch controls.

9. Blocky Roads Blocky Roads looks an awful lot like Mine craft, but it’s very much its own game, and features some of the best physics racing gameplay. Jump into your car and discover green hills, snowy mountains and desert dunes in this unique blocky adventure. One of the best racing games you can get for your phone or tablet.

10. Papa Pear Saga King couldn’t quite deliver on the promise of a Candy Crush Saga sequel, but Papa Pear Saga’s still a fine time-killer. Exciting adventures await you in the Fruity Forest, the Great Pearamids and beyond. So bring your friends and see who can get the highest score.

11. Plants vs. Zombies 2 The sequel to the hit action-strategy adventure brings the fun to tablets and touchscreens.. The game takes players to Ancient Egypt, the golden age of piracy, and the Wild West, with each time period providing its own unique challenges. Combining solid tower defense mechanics with cute graphics, Plants vs. Zombies 2 brings some new plants to the mix, such as the Bloomerang and the Lightning Reed.

12. Angry Birds Star Wars 2 The game differs from the other Angry Birds games because you can summon a specific bird/pig instead of the pre-determined selection. This summoning can be done to replace each bird/pig. Use the Force for good against the greedy Pork Federation or choose a much darker path.

13. Fruit Ninja In Fruit Ninja, the player slices fruit with a blade controlled via the touchscreen. As the fruit is thrown onto the screen, the player swipes their finger across the screen to create a slicing motion, attempting to slice the fruit in half. It is a juicy action game with squishy, splatty and satisfying fruit carnage.

14. Galaxy on fire2 Galaxy on Fire 3D, most notably in its more extensive campaign and trading system; along with its addition of new weapons and equipment, additional mission types, and hidden systems and blueprints. Featuring stunning graphics, an expansive universe, and hours of story-driven campaign play, Galaxy on Fire 2 is an impressive space game.

15. Pitfall It is a perfect runner from Activision. The main hero adores adventures and one day, when he was in search of ancient treasures the volcano began to erupt. There remained one thing to do: run from there as quickly as possible. He will meet many obstacles on his way and you have to help him get out of there safe and sound. Jump, slide, use whip, cling to the ropes and collect the bars of gold, which can be spent in the in-game shop.

16. Modern Combat 4 In the wake of a nuclear disaster, the only chance to avoid global devastation is in the hands of the few elite soldiers who must track down and rescue the world’s leaders from a frighteningly familiar terrorist group. It is back on smartphones with a new chapter to push the boundaries of mobile gaming even further.

17. Cut The Rope is an addictive puzzle game that challenges you to feed candy to the cute little OmNom by swiping the screen in order to strategically cut ropes and avoid hazards, all while collecting stars across the puzzle map. Soon its sequel is coming out.

18. Replica Island It is an extremely polished platform game that pulls off the shock result of being very playable on an Android trackball. The heavy momentum of the character means you’re only switching direction with the ball or d-pad, letting you whizz about the levels with ease. Then there’s jumping, bottom-bouncing, collecting and all the other usual platform formalities.

19. Action Potato In Action potato you control three pots. Pressing on the pots makes them jump up into the air, where they harvest potatoes. See how many you can get in a row. That’s the gist of it. And don’t collect the rotten potatoes, else you die.

20. Quadropus Rampage Quadropus Rampage is an Endless Roguelike that casts you, the player, as an enraged, four-legged cephalopod. It is your quest to reach the bottom of the ocean and destroy Pete, the evil god of the sea, before his army of abyssal creatures can overtake the ocean. It is a fun, free, and weird brawler game to that you can use to whack boredom in the face.