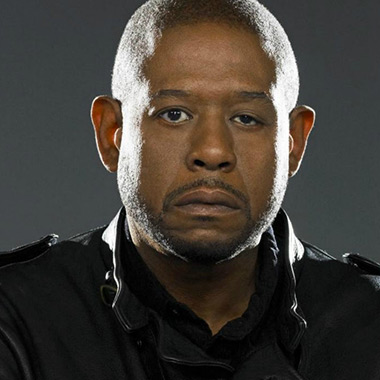 “My parents moved to Los Angeles when I was really young, but I spent every summer with my grandparents, and I’d stay with my grandfather on the farm in Longview. He was retired from the railroad, and he had a small farm with some cows and some pigs. I remember part of my youth was feeding hogs and plowing fields and stuff, so that’s a part of me.”

Forest Whitaker was born on July 15, 1961 in Longview,Texas. He is an American producer, actor and director.When he was just 4 years old,his family with him moved to Carson,California.His father name is Forest Steven Jr. who used to work as insurance salesman and his mother name is Laura Francis who works as special education teacher and also got two Masters degrees while she raised her children.He have got two brothers named Damon and Kenn and also a sister named Deborah. On a football scholarship he attended at Cal Poly Pomona.Due to her back injury he was forced to change her major to music.He then in 1980 toured to England with Cal Poly Chamber Singers.He then again changed his major to drama while he was still in Cal Poly.He then studied opera at University of Southern California and at the same time was accepted by University’s Drama Conservatory.In 1982 he was graduated from USC.He also got scholarship at the branch of Drama Studio London in Berkeley,California.

Whitaker have worked with different directors and star actors.He also worked with video film actors like Lil Wayne,50 Cent and Maggie Grace.In 1982 he played as a high school football player in Fast Times at Ridgemont High.He worked with co-star Judge Reinhold,Phoebe Cates,Sean Penn and Robert Romanus.He then worked with Tom Cruise and Paul Newman in The Color of Money.He also played in the comedy movie Good Morning,Vietnam.He then in 1988 acted with Jean Claude Van Damme in Bloodsport.

He then played as a lead role in Bird as musician Charlie Parker.In 1999 he played in Ghost Dog:The Way of the Samurai which was directed by Jim Jarmusch.He then appeared in 2000 production Battlefield Earth which was one of the worst films ever made.This movie won many awards and was also nominated.He also have a small and uncredited role in The Fellow which was one of five short film produced by BMW to promote its cars.In 2002 he starred in the thriller film Phone Booth along with Kiefer Sutherland and Colin Farrell.In the same year he was also seen in Panic Room as a bad guy.

In 2006 he appeared in The Last King of Scotland which earned many positive reviews and was honored and won many awards.He then acted as Dr.James Farmer Sr. in The Great Debaters in 2007.He also worked as a supporting role in The Air I Breathe,Street Kings and Vantage Point.He played the lead role in The Butler.He then worked with Jennifer Hudson,Jacob Latimore and Angela Basset in the film Black Nativity.In 2013 he acted as FBI agent chasing as escaped drug cartel leader with Arnold Schwarzenegger in the film The Last Stand.

In 1980 he was the part of comic book salesman in Amazing Stories.In 1985 and 1986 he was seen in first and second parts of North and South.He started producing and directing in 1990’s.In 1991 he co-produced and co-starred in A Range in Harlem.He first directed Waiting to Exhale which was based on Terry McMillan novel.He also directed Whitney Houston’s music video Exhale (Shoop Shoop).He then directed romantic comedy movie Hope Floats where Sandra Bullock and Harry Connick Jr was starred in it.He also directed romantic comedy movie First Daughter in 2004.He was also one of the director of Fruitvale Station.

10th Annual Hollywood Film Festival honored him Hollywood Actor of the Year Award in September 2006.He also received American Riviera Award as he was honored at Santa Barbara International Film Festival 2007.In 2009 he was honored by Xavier University of Louisiana at 82nd Commencement Ceremony in 2009.He is a vegetarian and posted a video with her daughter on the behalf of PETA.He is also the Goodwill Ambassador for Peace and Reconcillation of UNESCO.He co-founded International Institute for Peace in May 2011.He was also awarded with AAFCA Award and Gotham Award in 2013.In 2014 he was awarded with AFI Award for movie Fruitvale Station,Independent Spirit Award,Stanley Kramer Award,Kirk Douglas Award  and Image Award.

He got married to Keisha Nash who is an actress.He met her at the set of Blown Away.He have two daughters named Sonnet Noel Whitaker and True Whitaker by his wife Keisha Whitaker and a son named Ocean Whitaker from his previous relationship. He also has Autumn who is a stepdaughter through his marriage with Keisha.He also studied yoga and also have got black belt in Kenpo.He says that her small left eye is due to hereditary.He wants to correct it by doing surgery not for cosmetic reason but due to his problem in left eye.