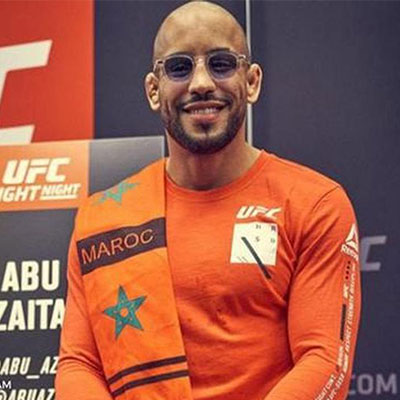 Abu Azatiar widely known by his nickname Gladiator is a German MMA fighter who is the former player for the federations like KSW, RESPECT FC, and WSOF. He began fighting in the medium weight category in German MMA Championship champion sine 2015.

Abu Aziatar was born on 10th March 1986, in Cologne, Germany. He is widely known by his nickname Gladiator. Aziatar is of Moroccan origin and has a younger brother Ottman Aziatar better known by the nickname Bulldozer, an MMA fighter.

Besides this, there is no any information about his parents. Furthermore, he has not revealed his education background yet.

Initially, the German MMA fighter competed for several federations. He is the former player for federations such as KSW, RESPECT FC, and WSOF. His first MMA fight was against Sandin Katica on 23rd July 2011 and got the victory. He next faced Dimitri Dzhumburidze on 17th  September 2011 and got victory via TKO.

Well, in the next match on 2nd February 2013, Aziatar won the fight by TKO against Roman Kapranov. He again faced Marcin Naruszczka at German MMA Championship 4 on 6th July 2013, and this time, Aziatar defeated Marcin via Tko. In the match against Piotr Strus, the fight ended with a 9-1-1 draw.

Later in 2015, Aziatar began fighting in the German MMA Championship in the medium weight. He won the championship by defeating Rafał Lewon in the final. His last match was on 7th October 2016, against Michael Arrant at WSOF 33 – Branch Vs. Magalhaes. Aziatar will be facing Vitor Miranda UFC Fight Night: Hamburg on 22nd July 2018.

Abu Aziatar is one of the well known MMA fighters. However, even being such a popular fighter, Aziatar often keeps his personal details a secret. Well, the 32 years old MMA fighter Aziatar is not married yet.

Moreover, it is still unknown whether he is a relationship or not. Furthermore, there are no any records of his past relationships as well. Likewise, he shares pictures of him and friend on his Instagram. So it seems that Aziatar is still single. Aziatar might be focused on his career rather than being in any relationships.

Professional MMA fighter Abu Aziatar is living a lavish life. He has participated in several champions and has won several fights as well as championships through which he has earned a good sum of money.

Moreover, he owns several luxurious cars including Lamborghini worth $200,000. Furthermore, he often visits a new place on his vacations. Allocating information from several sources it is found out that his net worth as of 2018 is around $ 3 million.