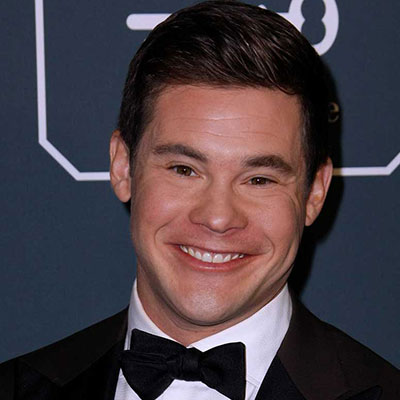 Adam DeVine is an American actor, comedian, voice actor, singer and screenwriter who is famous for Comedy Central series, Workaholics and Adam DeVine’s House Party. He mostly plays comedic roles in movies. He is a hardworking person and has made a name for himself in the Hollywood industry.

DeVine is currently in a steady relationship with girlfriend, Chloe Bridges. The two have been together since 2015. Their relationship is still going strong. To know more about DeVine’s life, net worth, career, house, cars, relationships, keep scrolling.

Adam DeVine was born on November 7, 1983, in Waterloo, Iowa. His father’s name is Dennis DeVine whereas his mother’s name is Penny DeVine. DeVine also has a sibling sister, Brittani DeVine. Regarding his nationality, he is an American. He belongs to mixed (Irish, Dutch, German) ethnicity.

At the age of 11, DeVine was hit by a cement truck and left unconscious. He was in a coma for two weeks. The bones of his both legs were broken and he had a collapsed lung. Nevertheless, DeVine was able to regain his mobility but the injuries have left scars all over his legs.

As for his education,  DeVine went to Millard South High School and graduated in 2002. He later attended Orange Coast College alongside his now fellow cast member, Blake Anderson. The comedian later moved to Los Angeles to work as a stand-up and actor.

Adam DeVine began his career in 2006. He teamed up with his friends Blake Anderson, Anders Holm, and Kyle Newacheck to form a sketch comedy group named Mail Order Comedy. The group gained success on Myspace and YouTube. They went on to release a comedy music video “Wizards Never Die” and later released a full album named Purple Magic with 14 tracks.

DeVine’s debut on the big screen was with a small role in the 2007’s Mama’s Boy. Later, he had a recurring role in TV series, Samantha Who?. He played several small roles in various TV series like Traffic Light (2011),  Community (2013), Modern Family.

DeVine co-created and co-starred in Workaholics along with his friends from Mail Order in 2011. The series ran for seven seasons.

DeVine has starred in many movies including When We First Met (2016), Magic Camp(2016), Isn’t it Romantic (2017), Game Over Man (2018). He has also given his voice for the character Pizza Steve in Cartoon Network animated series Uncle Grandpa. Apart from that, he has voice acted for other series like American Dad!, Sin City Saints.

Adam DeVine is currently in a relationship with long-term girlfriend Chloe Bridges. The two met back in 2015 on the sets of horror comedy movie, The Final Girls. They connected quickly and began dating the same year. The couple supports each other. They have made several red carpet appearances and shared pictures of them together on their social media.

Before dating Chloe Bridges, DeVine was in a relationship with his Pitch Perfect co-star, Kelley Jakle. The two were in a relationship between 2012 and 2014. Jakle confirmed the dating rumors in an interview. However, they split in 2014 due to some differences.

Nevertheless, DeVine is now in a happy relationship with Bridges. The duo is going strong. There have been no rumors of their separation. They are not married yet. Perhaps they will take their relationship to next level in coming days.

Adam DeVine has an estimated net worth of $8 million. He has earned this fortune by acting in many movies. His show Workaholics is quite popular and it must have paid him well. The trilogy Pitch Perfect made a box office of $354 million worldwide, so we can assume he must have gotten a handsome salary for his role.

DeVine lives a comfortable lifestyle. He is still active in his career. With his charming personality and amazing comedy chops, we can definitely expect to see more of him in the Hollywood industry. Hence, his net worth is expected to rise in the coming days.