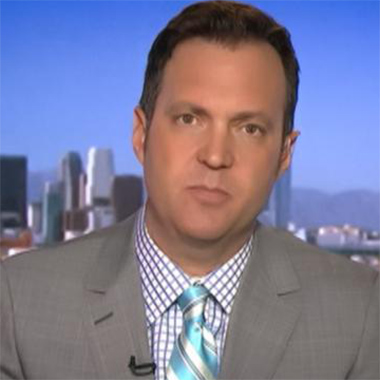 Adam Housley is an American journalist and a former professional baseball player. He joined Fox News Channel since 2001, as a Los Angeles-based senior correspondent.

Adam was born on August 13, 1971, in Napa, California, United States. His full name is Arthur Adam Housley. He attended Pepperdine University and received a double bachelor degree in political science and telecommunications. He also attended the University of Arizona and received his MA in International Security in 2014.

As a baseball player, Adam Housley played for both the Detroit Tigers and the Milwaukee Brewers minor league organizations. He pitched in 97 games. He had played on the 1992 National Champion College World Series Baseball Team.

He covered the 9.0 earthquake and subsequent tsunami in Japan. He and his crew were 70 miles of the reactors. Before the nuclear threat forced them to return to Tokyo they were filing live reports for Fox News. His coverage was featured in The Napa Register, The Los Angeles Times and Mediabistro.

He is able to speak and write Spanish fluently. While he was working for Fox, he covered the 2010 Copiapo mining accident. On October 12-13 2010, while he was reporting on site, each of the 33 miners which were trapped for 69 days was brought in a rescue capsule to the surface one at a time.

He became one of the first correspondents on assignment in Haiti. He there covered the devastation left in the wake of the earthquake that struck the Caribbean island nation on January 12, 2012. The week earlier to record reports shot on his iPhone, he found a plug-in mike at the Consumer Electronics show. He with his cameraman Eric Barnes were successful to turn rescue footage which was shot by Congressman Kendrick Meek into broadcast news.

In August and November 2014, during the protests, he was one of the reporters for fox on the scene in Ferguson, Missouri. As the fire was still burning on Florissant Avenue, he reported live from there. Some of his tweets provoked viewers to donate money to a local business who lost everything due to sacking and subsequent fires caused by arson.

He had reported in eight Latin American countries which include El Salvador, Nicaragua, and Venezuela. He did an exclusive interview with Sandinista leader Daniel Ortega and reported on the war against drugs. During his time he was seen providing extensive on-site coverage in the wake of the Southeast Asia tsunami in Thailand. He also was FNC’s lead reporter for Arnold Schwarzenegger’s 2003 campaign. He also has covered six hurricanes which include Rita and Katrina. He even has filed 45 stories from Mexico and the southern border. He had reported live at the Los Angeles International Airport. He did an exclusive interview with a Special Operations whistle-blower in April 2013. He also has covered the 2012 wildfires in Waldo Canyon, Colorado. He was awarded a Regional Emmy Award. He also worked for KFTY-TV as the lead reporter. From 1997 to 1998 he worked for KCPM-TV in Chico, California as a live reporter. He won a California Department of Forestry award.

The couple took part and won the ‘Celebrity Cupcake Wars’ on The Food Network in 2016. Their jalapeño cornbread, Chocolate Cabernet, and Vanilla Port Cupcakes defeated three other teams for the title. Adam and Tamera donated their winnings to the charity SnowballExpress.org. As of 2016, Adam Housley’s net worth is estimated to be $3 million dollars.