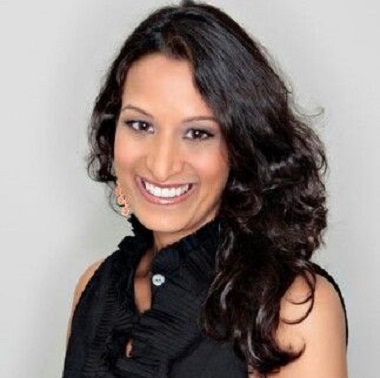 Aditi Kinkhabwala is an American sports reporter, who serves NFL Network as its national correspondent and a reporter for the NFL Media Group. She appears on various network’s live program including NFL Total Access, Around the NFL, GameDay Live,  GameDay Highlights, and GameDay First.

Aditi is a married woman and has a son with his husband.

Aditi Kinkhabwala was born in New York City and raised in Central New Jersey. She is the daughter of Minesh and Rita Kinkhabwala. Her parents have masters’ degrees; Kinkhabwala’s father is a chemical engineer whereas her mother is a math professor.

Kinkhabwala’s parents were worried about her career initially, but they have been entirely supportive of her writing. She told India-West,

“My parents have always given me the freedom to pursue what I wanted,”

“Anyone that knows me knows that that did not make sense. I’m just not that good at math,”

Aditi Kinkhabwala started her career as a sports reporter for the Bergen Record in New Jersey in 2002, where she primarily covered Rutgers football and men’s and women’s basketball match. But she spent summers writing on the Yankees and Mets.

Aditi was also Sports Illustrated’s Big East reporter and contributed a weekly column for SI.com. Her story on the Rutgers women’s basketball team in the aftermath of Don Imus’s derogatory characterization of its players was featured on the cover of that week’s Sports Illustrated.

Then, she worked as a writer for Wall Street Journal and for two New Jersey dailies, The News Tribune and then the Home News Tribune. She has covered the New York Giants through their last Super Bowl run, offering daily insights into the team and its personalities, as well as the NFL at large.

Aditi Kinkhabwala is currently working as a national correspondent for the NFL Network. She is also serving as a reporter for the NFL Media Group, where she appears on the network’s entire roster of live programming, Around the NFL, NFL Total Access, GameDay First, GameDay Live and GameDay Highlights.

And for the last three seasons, she has been a featured reporter on specialty programming, be it during training camp, Black Monday or the draft. Aditi’s repertoire includes “News of the Day” updates, pre-game and post-game hits and lengthier feature pieces. She also pens columns and enterprise stories, for ‘NFL.com.’

Aditi is also a regular guest on radio shows from Baltimore to Los Angeles. She also prepares to be a featured writer in the annual official ‘Super Bowl program.’

Aditi Kinkhabwala is a happily married woman. She got engaged to her longtime boyfriend, Matt Wiggins in 2012. One year later, the couple married on May 2013.

Her husband, Matt works as a Sales Engineer at Measurement Instruments. Kinkhabwala and her husband, Matt has a son. Being a media personality, she has not mentioned her son’s name on social sites. Aditi currently lives in Pittsburgh with her family.

Aditi Kinkhabwala holds an American nationality and belongs to mixed ethnicity of likely Indian and White. She is also active on social networking sites. She is considered to earn an attractive salary from her career, which hails from her journalism work. However, Kinkhabwala’s net worth is runs in million dollars.