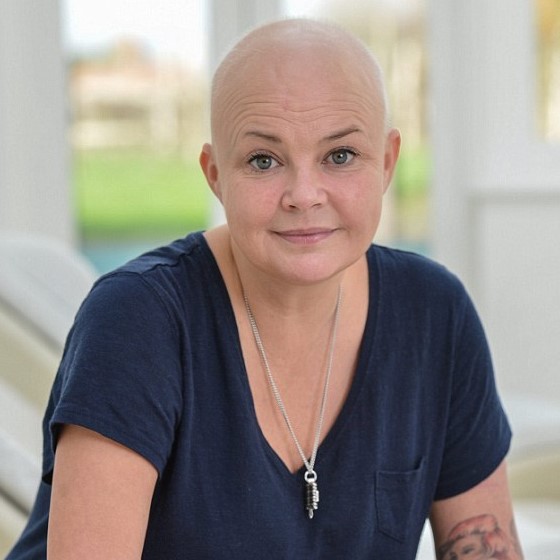 Gail Porter is well known as a television personality, presenter, actress, as well as a former model. She came into the spotlight when she appeared in men’s magazines like FHM, nude photos projected onto the houses of parliament. She is also recognized as television artist who has appeared in different popular reality TV shows like Celebrity Blind Man’s Bluff and Lily Savage’s Blankety Blank. She is affected by alopecia, which causes excess hair fall and makes her bald.

Gail Porter was born on 23 March 1971 in Edinburgh and is of  Scottish nationality. She joined Portobello High School and later enrolled at West Herts College to study BTEC HND in media production in Scotland.

Gail Porter started her career as a  presenter of Television Programmes like The Movie Chart Show, Top of the Pops, Live and Kicking and so on.  She served in programs such as ‘The Big Breakfast’ and Gail Porter’s Big 90s for  VH1.

She became much famous in 1990, when she pose nude photograph in magazine FHM, which was projected in the house of parliament in 1999.

In 2010, she presented as guest captain on What Do Kids Know? with Rufus Hound, Joe Swash, and Sara Cox on “Watch“. In the same year, in August,  she started a campaign for Solicitors Russel Jones and Walker to increase the relationship between HGV drivers and cyclist keeping them safer. Similarly, in October 2010, she was a host of a documentary on Current TV, Gail Porter on Prostitution based on investigating prostitution laws.

In 2014, she served as guest editor of Fashion Plus magazine. She wrote her experiences at London Fashion Week magazine in the same year on September. She shares her career, lifestyle and tragic stories of her life in the magazine.

She also joined “Celebrity Big Brother” house in the UK, on 27 August 2015 and identified as the fourth housemate who spends 20 days in the house.

Gail Porter is the  Vice President of UK charity, “The Children’s Trust ” which is focussed on those children having a brain injury.  She is also associated with Comedy Store, Laughing Point Event which organized a charity for homeless Youth.

Gail Porter faced many difficulties after she suffered from Alopecia. Alopecia is a disease which causes hair loss. She became bare-headed due to disease, and as a result, she didn’t get television programs. She started losing offer from modeling and television shows and became jobless. It was the biggest tragedy of her life that she began facing poverty. She even didn’t have money to pay rent and was also declared bankrupt due to failure to pay debts.

The most popular celebrity of Britain, Gail suffered from Anorexia too. She revealed on BBC Radio 5 live that, she had bipolar disorder and she was admitted on Mental Health Act of 2007. She was mentally disturbed due to the professional crisis.

Gail Porter needs the support of family and friends in order to sustain her life. Currently, she writes an autobiography to make herself busy in work. Porter has written a number of books such as, The Great Greedy Orge (1995), Stepping, Stones Writing and Number (2001), Stepping Stones Reading (2001), I Can Run Fast (2001), First Steps (2001) and  Laid Bare: My Story of Love, Fame and Survival (2007)

Gail Porter married Dan Hipgrave, guitarist of Toploader on  August 2001. She gave birth to a beautiful daughter after one year of marriage on 3rd September 2002. However, the coupele have since separated in 2004. Porter lost her mother in 2009, who she was very close to, due to lung cancer.

Gail Porter, the former model of Britain, has insomnia and now living a simple life in one flat. She claimed that her father helps him to pay rent too. She is facing crisis but still is positive towards her life with the supports of close friends and family, which includes her father and daughter, Honey Hipgrave.