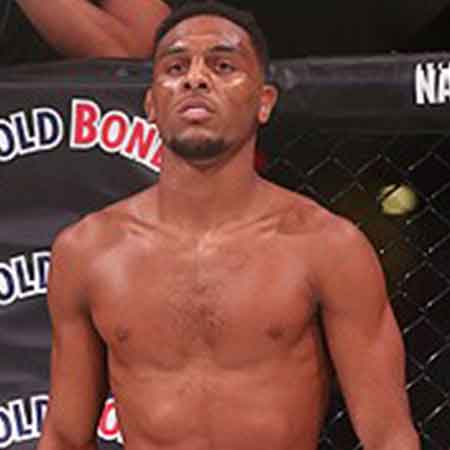 Antonio McKee Jr., better known as AJ McKee or Mercenary is an American mixed martial artist. He currently competes in the featherweight division of Bellator MMA. The fighter has a record of 11 wins. He began his career in 2015. He is associated with Team Bodyshop and fights out of Lakewood, California.

McKee is currently in a relationship with Alisia Vittoria. The two have been together for more than three years now.

AJ Mckee was born on 7th April 1995, in Long Beach, California. He has three siblings, two sisters, and a brother. His father, Antonio McKee is a former MMA fighter himself. Antonio was in the wrong company for quite some time.

When AJ was 3 years old, Antonio was about to join his friends for a robbery. However, AJ stopped his father and since then Antonio started changing, eventually leading to a successful 15 year professional MMA career.

AJ began showing interest in fighting as a teenager. He was in private schools and trained with his father at the gym. He attended Long Beach Polytechnic High School. AJ then went to Ohio but did not care much for school.

His father brought him back to California where he studied at Cerritos College. After realizing, he was done with college, AJ began training full time in his father’s gym BodyShop Fitness.

AJ McKee was hard at training from the beginning. He relied on his natural abilities to fight the opponents. He has a record of 7-1 as an amateur. AJ McKee finally began his professional career in 2015. His debut bout was Marcos Bonilla at Bellator 136 on 10th April 2015. He won the fight via rear naked choke submission.

Furthermore, McKee used to smoke weed and party a lot not focusing much on his career. However, it was not until his third fight against J.T. Donaldson in which his eyebrow was split open, AJ started taking his career more seriously. McKee then signed a multi-year contract extension in 2015.

After that, AJ has won fights against Danilo Belluardo, Ray Wood, Brandon Phillips, and Blair Tugman. Till date, he has not lost any of the bouts. In recent events, he fought against Justin Lawrence on 13th April 2018 and won the bout via unanimous decision. He holds the record for the most consecutive Bellator wins.

The 23-year-old is yet to be married. However, he is in a long-term relationship with singer and model Alisia Vittoria. The two have been together for more than three years now. The two have relatively kept their relationship private. Nevertheless, AJ has posted some lovely words for his girlfriend. Check it down below.

Apart from that, AJ is also very close with his family. He has a good relationship with his father. He is also fond of his sisters and recently born younger brother.

Aj McKee has earned a great deal of money thanks to his successful MMA career. His debut bout against Bonilla reportedly paid him $3,000. Furthermore, his earned $20,000 for his match against Cody Walker.

AJ’s base salary must have increased a lot since he is gaining popularity. Lets also not forget about the win bonuses he must have received from his 11 wins. Allocating information from several sources as of 2018 it is found out that Aj McKee current estimated net worth is around $500 thousand.