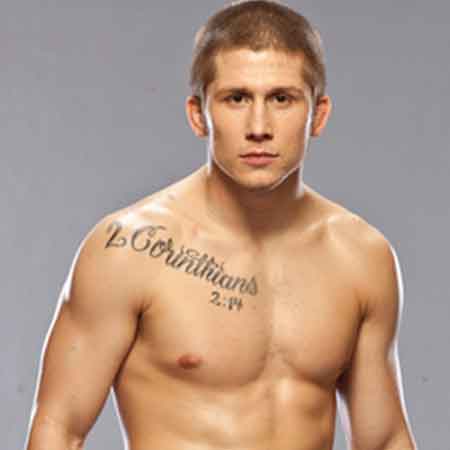 The American professional mixed martial artist, Justin Lawrence is well known as “The American Kidd”. He competes in the featherweight division of Bellator MMA. He is six-time International Kickboxing Federation National Champion. Lawrence has a record of 11 wins and 5 losses. The fighter has a black belt in Kempo Karate.

Justin Ray Lawrence was born on May 15, 1990, in Pacific, Missouri. He is of American nationality. There is not much information regarding his parents. He has a stepfather, Benny Voyles who is a former professional boxer and kickboxer. He was interested in fighting from a small age.

Lawrence began training at the age of six with his stepfather at his own gym St.Loius. He went onto be a two-time St. Louis’ Golden Gloves Boxing Tournament Champion. He is also a two-time Pan-American Kickboxing Champion.

Lawrence began his amateur MMA career in 2007 with a win via rear naked choke submission. He has an amateur record of 5 wins. The fighter then made a professional debut on December 4, 2010, at Strikeforce against Max Martyniouk. He won the bout via a unanimous technical decision.

Lawrence went on to fight in the Ultimate Cage Battles where he fought against Pete Martin and Jason Webb. He was victorious in both the bouts. After some years in his professional career, Lawrence left his dad’s gym to get more training partners. He now trains at the Alliance MMA.

The fighter was then selected to be part of The Ultimate Fighter: Live. He defeated two-time WEC veteran James Krause to become the official cast member. He then won against Cristiano Marcello to reach quarterfinals. For the quarterfinal fight, Lawrence was put against Michael Chiesa. He lost the fight via a TKO and was eliminated from the competition.

After the show, Lawrence signed a UFC contract. In his debut bout against John Cofer, Lawrence won the fight via KO. He then fought against Max Holloway and Daniel Pineda and lost both the fights. The fighter was then released from UFC and signed by Resurrection Fighting Alliance. He fought Luis Saldana, Mark Dickman, and Sam Toomer at the promotion.

Lawrence then signed a multi-fight contract with Bellator MMA in April 2015. He made his debut against Sean Wilson on June 19, 2015, and won the fight via a TKO in first round. Since his debut, he has won bouts against Isao Kobayashi, Treston Thomison, and Andrew Natividad. On the other hand, he has lost fights against Emmanuel Sanchez, John Teixeira da Conceicao, and AJ McKee till date in Bellator MMA.

The fighter has kept his love life under the wraps for now. There is no information about who he is dating at the moment. He has also not posted pictures with potential partners on his social media pages. Lawrence is a relatively private guy when it comes to his relationships.

He could be dating someone under the radar. But as of now, there have been no rumors regarding his relationships. So, we can assume that he is single. Lawrence is much more focused on his career at the moment.  So, he might not have had the time to be in relationships.

Lawrence is living a comfortable lifestyle at the moment. He is still active in his career so we can expect to see a rise in his net worth in coming days.