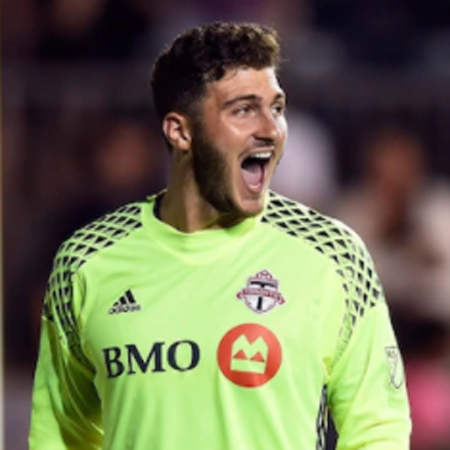 Alexander Nicholas Bono, better known as Alex Bono is a rising star of soccer. He is an American professional football player who has just begun his career in the related field and earned huge fame as a goalkeeper for the team, Toronto FC, in Major League Soccer.

Alex is unmarried but is currently in a relationship with his girlfriend. Scroll to know more about his early life, career, relationship, net worth.

Born on 25th April 1994, Alex Bono is the son of mother Kim Bono and father Mark Bono. He grew up in the city of Baldwinsville, New York with his sibling, Christian Bono. He has got a pet dog named Drax which is also one of the members of his family.

From the same city, Bono did his schooling from Charles W. Baker High School. Being passionate about soccer, he got involved in the full-time U.S. Soccer Development  Academy Club, Empire United. Later, in his college days, he rose up as a top goalkeeper for the state of New York.

Alex was one of the 51st highest sights of his graduating high school class who later joined the Syracuse University. His journey in the soccer never stopped; as he had already played over 20 matches as a freshman season as a goalkeeper since 2005.

In Syracuse University, he began as an intermediate for the Syracuse Orange Men’s Soccer and left a remarkable sign with the record of high eight saves during the 2012 NCAA Division I Men’s Soccer Tournament on 18th November 2012 against VCU Rams.

Instagram: Alex Bono with his teammate in the match against 11 Tonight vs Hartwich;

The starting 11 tonight vs. Hartwick. Thanks to all who came! #CuseMensSoccer #ACC #CuseNation

This brilliant performance rewarded him and voted him for the Big East Conference All-Rookie Team. Not only this, he became the Orange’s Rookie of the Year. In sophomore year,  he keeps maintaining the same balance in the team which named him the Atlantico Coast Conference Third Team too.

In 2014 NCAA Division I Men’s Soccer Tournament, his team earned one of the topmost national rankings though they reached the fourth round and got eliminated after the defeat against Georgetown. Likewise, there also, he successfully received the title a first-team All-American by the NSCAA.

Although Bono played several games in the tournament, his biggest turning point was he got selected 6th overall for the team, Toronto FC in 2015. At the very early age of 23, he received great opportunity to play from the Canadian professional soccer club which is based in Toronto, Ontario. His debut match from the team was against Charleston Battery on March 21 when he was loaned to Toronto FC II, on 20th March 2015. There he played in the jersey number 45.

The following year, Clint Irwin had a serious injury in the middle of the season due to which team manager Grey Vanney selected Bono into the starting role where he went through 14 straight starts that helped him built up his confidence being a young goalkeeper.

He even began the second leg of the 2016 Canadian Championship. Later, Irish returned to the regular season and the playoffs as Toronto reached the 2016 MLS Cup Final but defeated at the home ground against Seattle Sounders 5-4 on a penalty.

Instagram: Alex Bono with the 2016 MLS Cup along with his brother, Christian Bono;

What. A. Year. Thank you to everyone who made it possible. It’s a true honor to do what I do and the people I do it with make it all worth it. Here’s a little overview of how 2017 went… (

On 9th December 2017, TFC has a rematch of previous season against the Seattle Sounders in the 2017 MLS Cup Final at BMO Field where his team won the match with the clean sheet of a 2-0 win.

Apart from his professional, Bono is also equally focusing on his international; as he was called into a training camp for the United States men’s national soccer team on 9th January 2015.

This young goalkeeper, Alex is unmarried although he is romantically dating his girlfriend, Alyssa, since his college days. The boyfriend-girlfriend often spent quality time with each other and manage time through his busy schedule in training session.

We also can see few of the pictures of this beautiful duo on his social site, Instagram.

Instagram: Alex Bono with his girlfriend, Alyssa for the Alpha Phi formal;

Alex Bono is one of the young and talented goalkeepers who play for the team Toronto FC. As of 15th April 2017, he has a salary of $70,000 and compensating it he gets $93,750 per month. Altogether, his net worth is yet not published in social media but definitely, he lives a luxurious lifestyle from the earning from his profession.