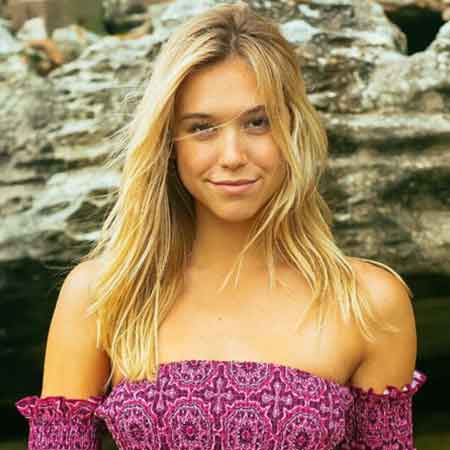 Alexis Ren is an American model as well as an Internet celebrity. So far, Ren is not married but she seems to have an affair with her Dancing With the Stars partner Alan Bersten.

Ren mentioned that she has feelings for Alan. Moreover, Ren previously dated an American model Jay Alvarez. Ren was Maxim’s cover girl for the August 2017 issue as well as Maxim’s Mexico cover girl for March 2018 issue.

Alexis Ren was born as Alexis René Gladbach on 23rd November 1996, in Santa Monica, California, United States. Her father Frank Gaylord was a lawyer and mother Cynthia Gaylord a health nutritionist expert. Her mother died in 2014 due to breast cancer.

Ren grew up along with her four siblings Devin Ren, Amber Ren, Alisa Ren, and Ace Ren. She belongs to an American nationality. However, her educational background is yet to be known.

Alexis Ren began her modeling career at the age of 13 working for Brandy Melville. At the age of 14, Ren was signed by Nous Model Management and appeared in an add for Seventeen Magazine. For August 2017 issue, Ren was Maxim’s cover girl.

Similarly, Ren was also Maxim’s Mexico cover girl for the March 2018 issue. She is also the Sports Illustrated Swimsuit Issue Rookie for 2018. Currently, Ren competes on season 27 of Dancing with the Stars along with her dance partner Alan Bersten.

Alexis Ren seems to be in a relationship with her Dancing With the Stars partner Alan Bersten. The couple has been romantically linked to each other since they are working together on the show. They were even rumored to be dating.

On October 2018, Ren mentioned that she has some feelings for Alan. However, her dancing partner Alan hasn’t yet mentioned anything about it. Ren and Alan are enjoying their company and frequently spend their time together.

Other than this, Ren previously dated Jay Alvarez who is an American model. The pair began dating in 2015. They were happily enjoying their love life and often shared photos on their social accounts. But the things didn’t go well in between the couple so that they ended their relationship in 2017.

Aged 21, the well-known and gorgeous model, Alexis Ren stands the perfect height of 1.74 m which is 5 feet 7 inches tall and weighs 58 kg. Likewise, Ren has further maintained a perfect body figure with the body measurements of  35-23-35 inches.

Currently, Alexis Ren has an estimated net worth of $3 million. Ren earns a fortunate amount of money from her modeling career. Likewise, Ren earns the salary around $300,000 annually.

Since long, Ren has been working in the same field and has done modeling for several popular magazines. Moreover, Ren has further appeared in several ads and commercials. Looking at her hard work and dedication, Ren’s net worth is sure to be raised in the upcoming days.