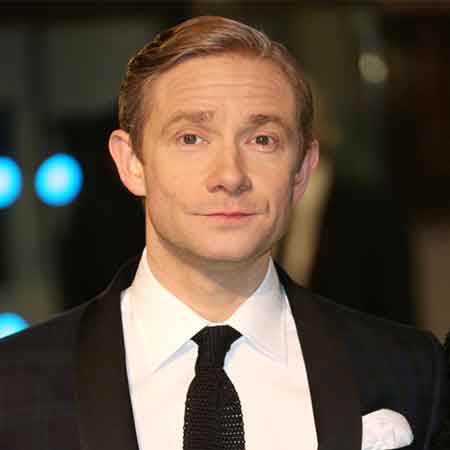 A British actor and comedian, Martin Freeman is well-known for portraying in the UK sitcom mockumentary The office as Tim Canterbury. He also appeared in a party political broadcast to endorse the Labour Party ahead in the UK general election.

Martin Freeman married to Amanda Abbington in 2000 and welcomed two children together. The couple separated after sixteen years of marital relationship.

Martin was born as Martin John Christopher Freeman on 8th Septemeber 1971, in Aldershot, Hampshire, England. He was born to father, Geoffrey Freeman, a naval officer, and mother, Philomena (nee Norri) but they divorced when he was a child. He was one of the youngest children among five siblings.

When Martin was 10 years old, his father died of a heart attack and he grew up along with his siblings. He attended the Salesian School and later enroll at Brooklands College for media studies. For further studies, Martin also attended the Central School of Speech and Drama.

Freeman appeared in several TV shows, theatre productions, and several radio productions after attending Speech and Drama School. With a dream to become a successful actor, he began to move into serious dramatic roles. His outstanding acting skills can be seen in Charles II: The Power and The Passion, This Life, The Robinsons, etc.

Martin notable acting also can be seen in the movies such as Call Register, Fancy Dress, Round About Five, Hot Fuzz, Lonely Hearts, Wild Target, Saving Santa, The Girl is Mine, Ghost Stories, Cargo, Black Panther, and much more.

Martin and Amanda also appeared together in Sherlock, The Debt, Swinging with the Finkles, The Robinsons, etc. After sixteen years of marital relationship, Martin and Amanda started having a problem in their relationship which separated them. Freeman announced their separation through the Financial Times on 22nd December 2016.

Moreover, Martin Freeman also receives a decent amount of money from his different personal investments. Allocating information from several sources as of 2018, Martin Freeman’s current estimated net worth is around $15 million.