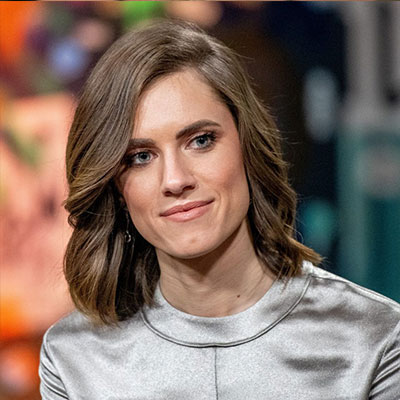 An American actress, comedian, and singer, Allison Williams is well-known as Marnie Michaels for her outstanding performance in the comedy-drama series, Girls. Her recent performance in horror movie, Get Out gain her critically acclaimed performance.

Alison got married to her long-term boyfriend Ricky Van Veen, who is the co-founder of College Humor, in 2015. So, let’s get to know all about Allison’s early life, career, personal life, net worth, salary and much more.

Allison attended New Canaan Country School along with her younger brother, Doug who was three years junior to her. After completing high school, she attended Yale University where she was a member of the improv comedy troupe Just Add Water and also involved in the YouTube series College Musical.

While attending the University, Allison performed in a mashup Nature Boy which went viral on the Internet. Her outstanding performance led her to feature in the HBO series Girls which was premiered on 15th April 2012. Afterward, she wrote a series Funny or Die sketches and eventually appeared as Danielle in the third season of The League name as “The Guest Bong”.

[ CAPTION: Allison Williams in the movie Get Out ][ SOURCE: Hitberry ]

Moreover, Allison also featured in TV series such as Jake and Amir, Girls, The Mindy Project, The Simpsons, American Dreams, etc. which earned her wide recognition. Her outstanding performance in the movie Get Out as Rose Armitage won National Board of Review as Best Cast in 2017.

Despite acting career, Allison Williams is also an ambassador for Horizons National. Being ambassador she talked about the political views, advocacy, millennial activism, women, etc. in Hollywood on the Politico podcast Women Rule.

Also, in 2016, she led the 10 Days of Giving Campaign in order to raise awareness and fund for the Horizons National organization’s educational goals.

Being such a gorgeous and talented actress, Allison Williams kept her personal life away from any controversies. She got married to her long-term boyfriend Ricky Van Veen, after dating for four years. Ricky is a co-founder of CollegeHumor and the couple is dating since 2011.

After getting engaged in 2014, Allison and Ricky Van married on 19th September 2015. The ceremony was officiated by Tom Hanks, an American actor, and Filmmaker, and was totally a private ceremony held in Saratoga, Wyoming. Currently, the couple lives in Chelsea, New York.

Allison earns a good sum of money in her career. She featured in several TV series and movies through which she earns a decent sum of money. She also receives $50 thousand money from different advertisement, sponsors, and endorsements. Allison is also a media brans advertiser of the Nike sports brands.

Allocating information from several sources, it is found out that the Get Out actress, Allison William has the current net worth of $2 million.

Allison William’s spouse, Ricky Van Veen also has the good sources of income. He has a production company, Notional and is the CEO of the company which produces the Food Network show, Chopped. He also has the T-shirt business called BustedTees through which he earns a huge sum of money. Ricky Veen current net worth is estimated to be $25 million.