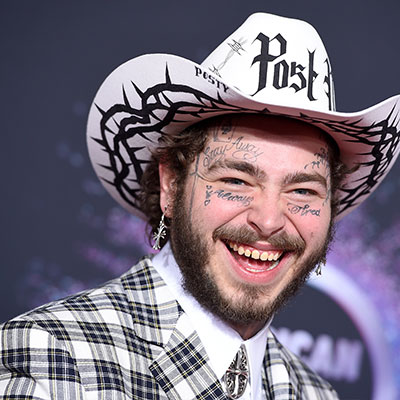 Post Malone is one of the renowned American singers, songwriter, record producer, and guitarist. He is best known for his debut album, White Iverson which he followed up with songs, Too Young, Tears and Holyfield.

Post Malone is currently in the relationship with girlfriend, Ashlen. However, Post Malone is too secretive about her beloved partner. Read more to know all about his personal life, salary, net worth, career and early life.

Austin Richard Post was born on 4th July 1995, in Syracuse, New York. Post Malone was raised by father, Rich Post and his stepmother, Jodie Post. His father is a former disc jockey and he is the one who introduced Malone to many different music genres including rock, hip-hop, and country.

The multi-talented, Malone started learning music since his early age. He is a fan of video games Guitar Hero. He has credited Guitar Hero as his initial interest in learning guitar.

Malone attended at the Grapevine High School where he was voted most likely to become famous by his classmates as a senior. During that time, he worked in the Chicken Express in order to pay his school fees.

Later on, he joined Tarrant County College but did not continue his further education. Right after that, he moved to Los Angeles, California with a professional game streamer, Jason Probst and began his musical journey.

Post Malone released his debut studio album Stoney in 2016 on Republic Records. The album reached number one on the US Rap chart and number 2 on the US R&B/Hip-Hop chart. Likewise number 4 on the Billboard 200 chart and the Top 10 in several countries including Canada, Denmark, Australia, New Zealand, Sweden, and the UK.

Moreover, White Iverson singer, Stoney was certified two times Platinum in the US. Till date, Post Malone has been featured with several other artists including 50 Cent, Gucci Mane, Kanye West, and more. Currently, Malone is working on his upcoming albums Beerbongs and Bentley which is set to be released.

Post Malone does not speak much about his personal stuff to the media. But, analyzing his Instagram account, he seems to be dating a beautiful girl, Ashlen. The couple met each other at the nightclub when Ashlen booked the whole nightclub for his show.

Though Malone does not speaks a lot about his love life, he often shares pictures of himself with his girlfriend.

Besides, they have maintained their relationship very strong. Until now, none of them have involved in any other love affairs.

Allocating information from several sources as of 2018, it is found out that Post Malone’s current net worth is estimated at around $8 million. He earns a great amount of money from his singing career.

Besides, his hits albums Stoney and August 26th have boosted his net worth. As of 2017, his album reached number one on Top R&B/Hip-Hop albums chart.

Apart from his singing career, he is also very much popular on social networking sites like Instagram and Twitter. He has garnered millions of followers on it. Post Malone resides in $3 million square foot home in northern Utah.

Besides, he also owns a number of cars including white Royal Royce which price in the market is around $2 million.