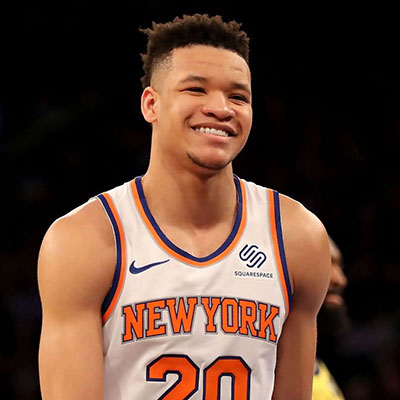 An American basketball player, Kevin Knox is a member of the University of Kentucky. He is the winner of two gold medals with USA Basketball at the 2015 FIBA Americas U-16 Championship and 2016 FIBA U-17 World Championship.

The 18-year-old young player, Knox is not involved in any kind of love relationship or marriage relationships. But, he surely has dated few girlfriends before. So, let’s know all his early life, career, personal life, net worth, salary and much more.

Kevin Knox was born on August 11, 1999, in Phoenix, Arizona. He is the oldest child among four children of parents, Michelle and Kevin Knox Sr. His father played wide receiver for Florida State. He was raised along with his two younger brothers, Kobe and Karter and a younger sister, Ashley. He got all the support needed from his family to go forward with the positive vibe in everything that comes along.

[ CAPTION: Kevin with his father and mother ][ SOURCE: Instagram ]

Knox went to Tampa Catholic High School in Tampa, Florida for his early education. He was offered the scholarship by Duke, North Carolina, Missouri, Florida State and many other Universities. But he chooses the University of Kentucky for further his higher education.

Kevin Knox began playing basketball from the very early age. He played in his high school as a junior scoring 30.1 points per game, 11.2 rebounds per game and 2.4 assists. He led his team to regional and district championships with the runner-up position in the 2016 Florida Class 4A semifinals.

Knox has played for several teams such as AAU team with his best performance in the games like McDonald’s All American and Jordan Brand Classic. He hit the spotlight after hitting a buzzer-beating shot in the John Wall Invitational in 2016. It took him no time to become one of the top players in 2017 class.

Kevin Knox started playing for Wildcats after joining the University of Kentucky. He eventually became one of the Wildcats’ only three-point threats. He has made a great accomplishment within the short period he spent with his team in the game. He is the recipient of the two gold medals with USA Basketball at the 2015 FIBA Americas Under-16 Championships and 2016 FIBA Under-17 Championship.

As one of the best basketball player, Knox has managed to garner name and fame as well as numerous fan followings. His life is caught up in between his games and education currently that there is no space for any kind of distraction.

He is yet to link his name with anybody and is possibly single presently. But, we believe this handsome hunk has dated girlfriends in his early age.

Kevin Knox is paid a huge amount per games he has played till the date. According to the source, his current net worth is estimated to be $3 million.

Knox turned down the offer to play in the Chinese Basketball Association which promised to pay $1.4 million. As a matter of fact, he is living a lavish life along with his family.