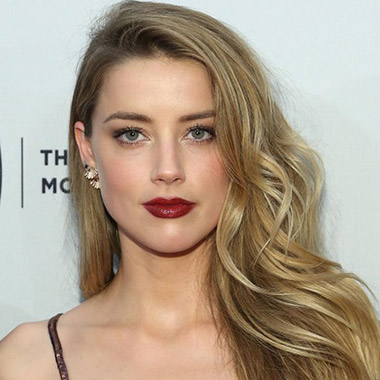 Amber Heard is a gorgeous American model as well as an actress. She debuted in the drama Friday Night Lights starring Billy bob Thornton. She also played in All the Boys Love Mandy Lane as a leading role.

Amber was born on April 22, 1986, in Austin, Texas United States. She was born to Patricia Paige and David Clinton Heard. Patricia is an internet researcher and David is a contractor. She has a sister named Whitney.

“I think when I became aware of my role in the media, I had to ask myself an important question ‘Am I part of the problem?’ And I think that when millions and millions of herd-working tax paying Americans are denied their rights and denied their equality you have to ask yourself what are the factors that are an epidemic problem and that’s what this is.”

Amber appeared in two music videos which include Eisley’s “I Wasn’t Prepared” and Kenny Chesney’s “There Goes My Life”. She also appeared in several TV shows. She was cast in the pilot episode of The Wb’s Jack & Bobby as Liz. She was also seen playing in the episode of The Mountain as Riley. She appeared as a salesgirl in The O.C. Starring Billy Bob Thornton.

She played in her first movie role in Friday Night Lights as Maria. The movie was critically successful. She then starred in an independent horror film Side FX as Shay. She also acted in Price to Pay Drop, Dead Sexy and You Are Here in a supporting role. She played as a teenage Josey in Niki Caro’s North Country. She also played in Nick Cassavetes’ Alpha Dog. She starred as Lila Archer in an episode of Criminal Minds in the same year. She later was cast in Hidden Palms as Greta Matthews. She was asked to lose weight in order to get the part. She took four months to lose her weight. She has up alcohol and mainly focused on her workouts and her diet. On May 30, 2007, Hidden Palms was premiered in the US. She was cast in All the Boys Love Mandy Lane. In September 2006 the film was premiered at the Toronto Film Festival. She was also seen playing in the 16-minute long short movie Day 73 in 2007. The film was premiered at Los Angeles Film Festival in 2007. She appeared in Pineapple Express.

She was seen playing in martial arts drama Never back Down. She then joined the ensemble cast of 2009’s The Informers. She appeared in the horror film The Stepfather. She was also seen playing in the comedy film Ex-Terminator. She acted in The River Why and The Joneses in late 2008. She described her role in the film The Rum Diary as Johnny Depp’s love interest in the October 2009 issue of Teen Vogue. She said that it was the best experience of her life.

She previously dated Tasya van Ree before she met actor Johnny Depp while they were filming The Rum Diary. In 2012 they began dating each other. After dating for a while they got married in a private civil ceremony at their home in Los Angeles. They got married on February 3, 2015.
She dropped out of her high school and earned a diploma degree from a home study course. Her best friend died in a car crash when she was 16 years old. As of 2016, Amber Heard’s net worth is $14 million dollars.