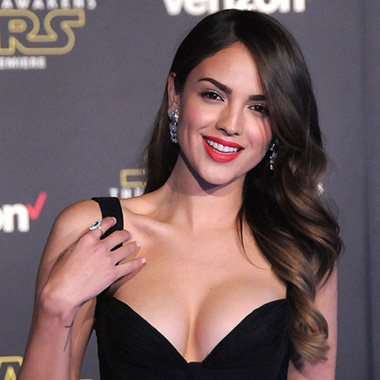 Eiza Gonzalez is a gorgeous Mexican singer as well as an actress. She became famous when she debuted in “Lola…Erase Una Vez” as Lola. She currently plays on From Dusk till Dawn: The Series as Santanico Pandemonium.

Her birth name is Eiza Gonzalez Reyna. She was born on January 30th, 1990 in Caborca, Sonora, Mexico. She was born to former Mexican model Glenda Reyna. She has a brother who is 12 years older than her. Her father name is Carlos. When she was 12 years old her father died in a motorcycle accident. According to her, her father’s death has a strong influence in her career. In her young days, she was diagnosed with Attention Deficit Disorder and was treated. She went to Televisa’s acting school Centro de Educacion Artistica when she was 14. At the age of 16 years, she was cast in “Lola…Erase una vez”.

She studied at Edron Academy. She also attended American School Foundation which is located in Mexico City.

Eiza studied acting at the M & M Studio from 2003 through 2004. The following acting school is situated in Mexico City and is run by famed actress Patricia Reyes Spindola. She was accepted into Televisa’s famous acting school Centro de Educacion Artistica in Mexico City when she was 14.

She was first spotted by producer Pedro Damian when she was still in school. She then was cast as Gonzalez in Floricienta by Pedro. She moved to New York City after completion of “Lola…Erase una vez”. She attended the lee Strasberg Theatre and Film Institute and studied three-month course there.

HER ACTING CAREER CONTINUES TO CHERISH

In early fall of 2008, she returned to Mexico City. She then was cast as a supporting character in the popular crime drama series Mujeres Asesinas. She starred in the episode Tere, Desconfiada alongside Mexican actress Susana Gonzalez. She released her debut album “Contracorriente” in early 2010. She released her second album “Te Acordaras de Mi”. She also announced that she had been cast as the lead protagonist in “telenovela Suena conmigo” via Twitter. In April 2010 she travelled to Buenos Aires to film. For a year she lived in Buenos Aires.

She returned to Mexico City after completion of her film in February 2011. On July 20, 2010, it was aired in Argentina, Mexico as well as other Latin American countries. From March to July 2011 the cast performed several concerts because of its success in Argentina. She attended castings for television series Miss XV in Mexico City. She was considered for the lead role. Unfortunately, she lost the role as producers felt that she was too old for the role.

She filmed a comedy drama film Casi 30 which was directed by Alejandro Sugich. The film was conducted in Sonora and Mexico City. She plays an 18 year old ballet student Cristina who falls in love with the film’s lead character Emilio. She was officially confirmed as the female protagonist Nicole Brizz Balvanera in Amores verdaderos. On July 23 2012, the filming began and in early May 2013 it was concluded. On September 3 2012 the show was premiered for canal de las Estrellas in Mexico. She then was casted in All Hail the Squash Blossom Queen by the director Adrian Cervantes in September 2013.

In late August 2013, she moved to Los Angeles, California to pursue her acting career. She can fluently speak and write English. She can speak broken Italian. She dated Mexican businessman Pepe Diaz in June 2011. They dated each other for two years. She then dated her co-star D.J. Controna in 2014. As of 016, Eiza Gonzalez’ net worth is estimated to be $3 million dollars.