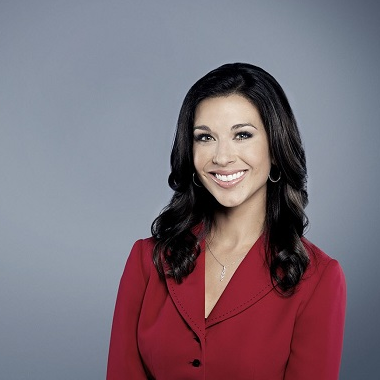 Ana Cabrera is the anchor of CNN’s weekend prime-time programming. She will be based in New York on Saturdays from 3-6pm ET and 7-9pm ET, and Sundays from 5-8pm ET.

Ana is happily married to her long-term boyfriend Ben. In August 2016 she and her husband Ben announced that they were expecting their second child, who was born in the fall of 2016.

Ana Cabrera was born on 13th May 1982, in Denver, Colorado. Her father Ronald Cabrera is an executive director of an educational firm whereas her mother Judith Cabrera is a counselor. She has four siblings named Matthew, John, Angelina, and Nathan.

Cabrera is a graduate of the Edward R. Murrow College of Communication at Washington State University with degrees in Communication, and Foreign Languages and Cultures.

She has four siblings named Matthew, John, Angelina, and Nathan. Cabrera is a graduate of the Edward R. Murrow College of Communication at Washington State University with degrees in Communication, and Foreign Languages and Cultures.

Cabrera began her broadcasting career for Denver’s CBS affiliate KCNC-TV and KMGH-TV as an intern. She worked as an anchor and reporter at NBC affiliate KHQ-TV and FOX affiliate KAYU-TV in Spokane, Washington From January 2005 to July 2009.

Besides that, Cabrera served on the Board of Directors of Mi Casa Resource Center. She worked on the board of the American Cancer Society. She also speaks at local schools with students who are interested in a broadcasting career.

She joined CNN as a correspondent in 2013. Most recently she was a part of the network’s investigative team. The weekend prime time post has become a bouncing off spot to a bigger platform. Prior weekend anchor Don Lemon now anchors a prime-time weeknight show.

Since joining CNN, she has reported on the Arapahoe High School shooting as well as Colorado’s historic legalization of marijuana for recreational use. She also reported extensively on the September 2013 floods that ravaged nearly a dozen Colorado counties, creating several deaths and billions of dollars in damage.

In 2014, Cabrera reported from New Mexico on the undocumented children that crossed the border unaccompanied. She has also reported on the death of unarmed teenager Michael Brown from Ferguson, MO.

Prior to joining CNN, Cabrera used to work as an anchor for the top-ranked daily morning news program at KMGH-TV 7 News, the ABC affiliate in Denver. She covered local and national news like the 2012 Denver Presidential Debate and election and the Aurora movie theater shooting.

She won an Emmy Award for her anchoring as a part of the 7 News morning team.  She and her team also honored with the Associated Press TV and Radio Association’s Annual Mark Twain Award for Best Morning Show Broadcast in 2013.

Ana is married to her long-term boyfriend Ben. The couple welcomed their first child named as Jackson Nielsen in December 2012. In August 2016 she and her husband Ben announced that they were expecting their second child, who was born in the fall of 2016. The duo named their daughter as Maria Nielsen.

Ana earns a good sum of money in her career. She holds an American nationality and belongs to white ethnicity. The 5′ 4″ successful and talented anchor is earning her handsome salary from her reporting career.

Allocating information from several sources it is found out that her current net worth is around $3.6 million.