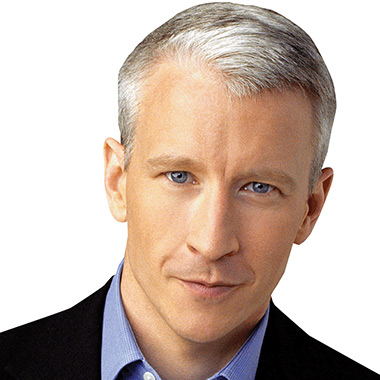 Anderson Hays Cooper was born on 3rd June 1967, in New York City, United States. His father Wyatt Emory Cooper was a writer and mother Gloria Vanderbilt a designer, writer, artist and also heiress. Cooper grew up along with his brother Carter Vanderbilt Cooper.

During his childhood days, Cooper suffered from dyslexia diseases. Cooper studied at Dalton School. Later, he went to attend Yale University where he resided in Trumbull College. In 1989, Cooper majored in political science and graduated with a B.A.

Anderson Cooper began appearing on media since his childhood. Cooper once appeared at Harper’s Bazaar and was photographed by Diane Arbus. He also became a guest on The Tonight Show with his mother at the age of three. Furthermore, he also appeared as an impostor on the program, To Tell the Truth at nine years old.

Moreover, Cooper further modeled for Calvin Klein, Ralph Lauren, and Macy’s. After his graduation, Cooper decided to work for ABC answering the telephone but he was unsuccessful. So, Cooper began working for Channel One as a fact-checker. Later in 1995, Cooper began working for ABC News as a correspondent and soon became the co-anchor on its overnight World News Now program.

Likewise, Cooper was also a fill-in co-host for Regis Philbin for the TV talk show Live with Regis and Kelly in 2007. Moreover, he further hosted ABC’s reality show The Mole. In 2001, Cooper began working for CNN as a commentator. Cooper is currently the primary anchor of the CNN news show Anderson Cooper 360°.

Similarly, Cooper is also serving as the correspondent for 60 Minutes since 2007. Other than this, he has further hosted programs such as CNN Heroes: An All-Star Tribute, Planet in Peril documentary, and others. Besides his journalism career, Cooper is also an author. The Rainbow Comes and Goes and Dispatches from the Edge are the books written by Cooper.

Anderson Cooper is not married yet and is not dating anyone at the current moment. Cooper is openly gay. He previously dated a bar owner Benjamin Antoine Maisani. The couple began dating in February 2009.

However, the duo failed to continue their relationship and separated in 2018. Cooper confirmed his break-up with long-term boyfriend Benjamin in March 2018. Likewise, Cooper previously dated Cesar Recio.

Cooper and his boyfriend Cesar began dating in 2004. But the things didn’t go well in between them which resulted in their break-up in 2009. Other than this, there are no any rumors of Coopers’ relationships.

Anderson Cooper Net worth and Salary

Anderson earns a tremendous amount of money from his multiple profession. As of 2018, the estimated net worth of Cooper is $100 million. Likewise, he earns an average annual salary of $11 million.

The multiple awards winner, Cooper has been working in the same field for a long and has worked for popular channels including ABC and CNN. Moreover, Cooper further adds money from his career as an author.